Russia, Belarus Fall Out over Recognition of Abkhazia, South Ossetia 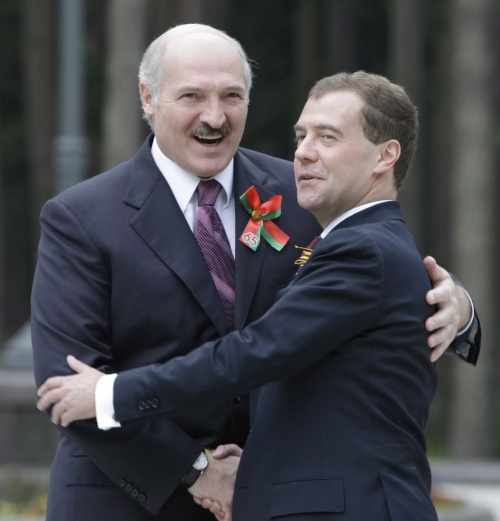 President of Belarus Alexander Lukashenko (L) and Russian President Dmitry Medvedev (R) embrace each other as they meet in the presidential residence Gorki outside Moscow, Russia, 08 May 2010. The brotherly hug has now been replaced by mutual accusations.

Russian President Dmitry Medvedev and his Belarussian counterpart Alexander Lukashenko have ended up in a fight over the recognition of breakaway Georgian republics Abkhazia and South Ossetia.

The new conflict between traditionally close Russian ally Lukashenko, dubbed by the US the last dictator in Europe, and the Kremlin is casting doubt on the previously seemingly unbreakable bond between Russia and the regime in Minsk.

In a statement cited by the Russian media Saturday, the Russian Presidency slammed Lukanshenko after the latter accused Dmitry Medvedev of distorting his words with respect to a promise to recognize the independence of South Ossetia and Abkhazia.

Medvedev has claimed that the Belarussian President had vowed to recognize the two separatist republics, which are de facto Russian client states, at a meeting of the Collective Security Treaty Organization, a post-Soviet space security cooperation body, but had then failed to live up to his promise. On Saturday, the Russian Presidency even expressed readiness to make public a transcript of an official CSTO meeting proving Medvedev's words.

Lukashenko in turn claims that he said Belarus could recognize the independence of South Ossetia and Abkhazia but it first had to consider the consequences of this act.

Abkhazia and South Ossetia seceded from Georgia after the August 2008 Georgian-Russian War caused by turmoil in the latter republic. Despite Russian diplomatic efforts, the two new states have been recognized only by the Kremlin and Nicaragua, Venezuela, and Nauru.

The row between Medvedev and Lukashenko is seen as a new instance of instability of the strong Russia-Belarus bond already shaken by a natural gas dispute earlier in 2010, and moves on part of the Belarussian regime that suggest desire for closer ties with the West.