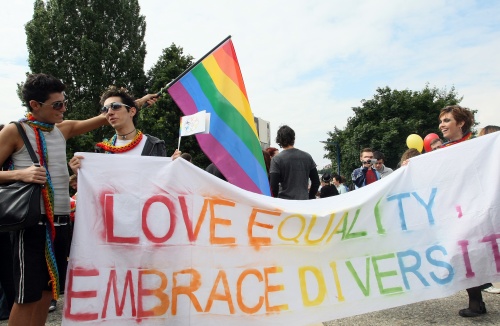 A Pazardzik prosecutor has scandalized the Bulgarian society with his deliberations on human sexuality. Pictured: the third Sofia gay pride parade in June 2010. Photo by EPA/BGNES

A recent ban on public displays of homosexuality in Bulgaria's Pazarzhik has been revoked with an intervention of the Supreme Administrative Prosecutor's Office in Sofia.

The scandalous ban in Pazardzhik was upheld by the local prosecutor Stefan Yanev who backed his decision with extensive deliberations on human sexuality, “natural law,” and “propriety”, and essentially described public displays of one's sexual orientation as debauchery.

The Pazardzhik prosecutor consistently upholds that heterosexuals should be not allowed to demonstrate their sexual orientation either, but subtly classifies other orientations as “unnatural.”

He compares homosexuality, bisexuality, and heterosexuality with pedophilia, zoophilia, gerontophilia, necrophilia, and fetishism, as he considers all of those forms of sexual orientation.

Yanev issued his decision after Bulgarian gay rights activists appealed against a ban on gay parades introduced by the local authorities in Pazardzhik.

The Supreme Prosecutor's Office, however, believes that the local ordinance banning displays of sexuality, which was upheld by the prosecutor, is illegal and contrary to national and international legal norms.

“Yanev's ignorance is his own problem but it also turns into the problem of 120 000 people living the Pazardzhik Municipality when he uses it to interpret rules and legislation that he apparently did not even read,” said an activist of the Bulgarian organization “LGBT in Action.”