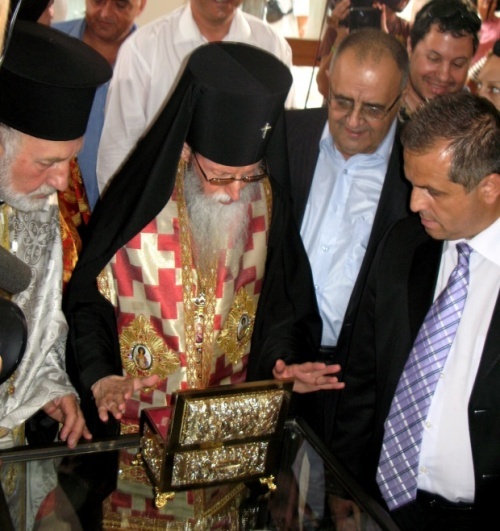 The previous reliquary of the relics of St. John the Baptist (pictured) will be used for two other holy items as Bulgarian PM has provided a special silver and gold reliquary for the st. John relics. Photo by Darik News

Bulgaria's top recent archaeology find, the alleged relics of St. John the Baptist, has been transferred to a silver and gold reliquary.

The special reliquary is a personal present from Bulgarian Prime Minister Boyko Borisov, who paid for its creation production by Gancho Ganev, a craftsman in Plovdiv.

The reliquary was handed Saturday morning to the priests in the St. George Church in the Black Sea town of Sozopol where the relics are kept by Diaspora and Religions Minister Bozhidar Dimitrov.

The silver and gold reliquary features scenes from the life of St. John the Baptist, and an inscription stating, “A present from Boyko Borisov, Prime Minister of the Republic of Bulgaia, August 2010.”

The reliquary that held up to now the relics of St. John – a tooth and parts of a skull and an arm bone – will be used to keep relics of St. Andrew presented two months ago to Sozopol by Constantinople Ecumenical Patriarch Bartholomew I, and a piece from the Holy Cross donated by the Bulgarian government and National History Museum.

Dimitrov said the three holy items will be laid in state together. After the completion of the renovation of St. Cyril and St. Methodius Church in Sozopol, they will be transferred there.

The relics of St. John the Baptist were discovered in the floor of a medieval monastery church on the St. Ivan Island in the Black Sea off the coast of Sozopol by archaeologist Kazimir Popkonstantinov and his team. The greatest evidence for their authenticity is an inscription found close to the original reliquary they were kept in.

The sensational character of the discovery, however, led to a conflict between Minister Dimitrov and leading Bulgarian archaeologists.