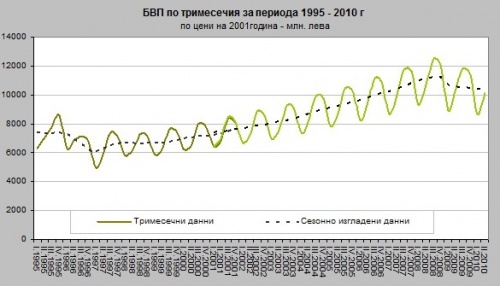 Bulgarian GDP per quarters 1995-2010. Image by the National Statistics Institute.

Bulgaria’s economy might be coming out of recession, with a record low slowdown registered Q2.

The National Statistics Institute reported a shrinking of GDP of just 1.5% for April-June on a yearly basis, which is a record low for five quarters back.

The new comparatively very small drop in GDP officially reported by the National Statistics Institute speaks in favor of forecasts coming from variouis quarters that the Bulgarian economy is actually coming out of recession.

The net added value created in Q2 is estimated at BGN 14 B.

For the first half of 2010 the drop of the Bulgarian economy is 2.5% on yearly basis.