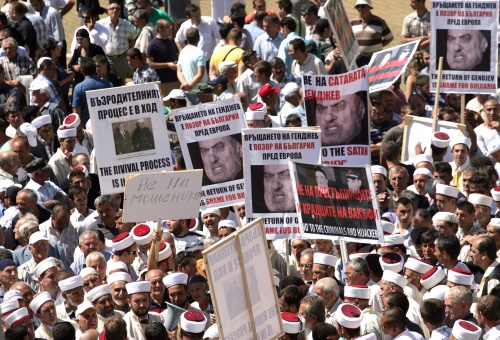 Scores of Muslims gathered at a protest rally in Sofia at the end of July to voice their discontent from the Supreme Court's rule to reinstate Nedim Gendzhev as Bulgaria's Chief Mufti. Photo by BGNES

The famous Dzumaya mosque in Bulgaria’s second largest city of Plovdiv became the scene of a fist fight among 200 Bulgarian Muslims in the eve of their holiest month of Ramadan.

The brawl erupted when supporters of the two fractions – of Nedim Gendzhev and Mustafa Ali Hadzhi clashed late Tuesday evening. Eyewitnesses say they saw three Members of the Parliament from the ethnic Turkish party Movement for Rights and Freedoms (DPS) being drunk and some people in the crowd fighting with knifes.

DPS firmly deny any involvement in the scuffle.

According to Gendzhev’s supporters, the clash began when about 100 people associated with Hadzhi stormed inside the mosque. Several individuals, including one security guard, have sustained light injuries and thorn clothes while the damage to the mosque consisted of broken windows. The fight was broken by the police.

This is the latest incident, following a series of protests of hundreds of imams all around the country against the May 12 ruling of the Supreme Court of Cassations which brought back Gendzhev as Chief Mufti.