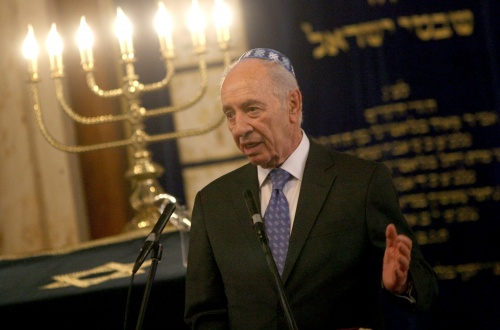 Isreali President Shimon Peres delivered a speech before representatives of the Bulgarian Jewish community in the Sofia Synagogue. Photo by BGNES

There will be peace between Israel and the Palestinian people, Israeli President Shimon Peres promised during a speech in Buglaria’s capital Sofia.

Peres met with the Bulgarian Jewish community in the Sofia Synagogue Wednesday night, where he delivered an address.

His promise for peace in the Middle East was greeted with a standing ovation by the people present in the central synagogue in Bulgaria.

In his words, Isreal wants to settle its conflicts with the Palestinians in order to have peace in the Middle East, and has no intention of going back into the Gaza Strip territory.

“Bulgaria and Israel do not have a common enemy but they are facing a common threat and this is terrorism,” declared Peres in his speech in the Sofia Synagogue mentioning Bulgaria’s contribution to the fight against the Taliban insurgents in Afghanistan.

He stated that the Bulgarian Jews who emigrated to Israel after World War II and their descendants have not forgotten their Bulgarian roots.

The Israeli President explicitly emphasized the many virtues of the Bulgarian Jewish immigrants in Israel and their warm feelings for Bulgaria, and thanked the Bulgarian people for rescuing some 50 000 Jews from deportation to Nazi death camps in 1943.