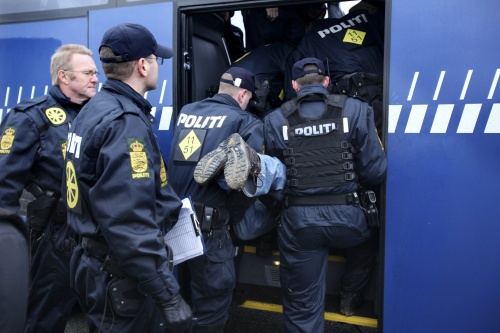 The police in Denmark’s capital Copenhagen has arrested a number of Bulgarian and Romanian citizens for being illegally in the country and for other crimes.

The arrests of the 17 people from Bulgaria and Romania and US citizen took place in disused warehouses and partially burnt down buildings in Frederiksberg and Copenhagen, and seven of the arrests were made in a former postal building on Njalsgade, reported the Copenhagen Post.

The paper points out the policemen were especial on the lookout for illegal aliens from Eastern Europe.

The new arrests happened on the same spot where a number of Roma people were detained, with 23 of them expelled from the country subsequently. This generated a debate about whether EU citizens can be thrown out of another member state.

The deportees were accused of squattering and violation of the public order, and were banned from entering Denmark for 2 years. The harsh measures were motivated by the numerous reports submitted by the mayor of Copenhagen against the illegal activities of the aliens.

The Copenhagen Post reminds that EU laws state that there has to be a significant violation of the law before someone can be expelled.

In a similar but much larger campaign the French authorities have started to demolish illegal settlements of Bulgarian and Romanian Roma around the country.

The French government is planning to remove half of the 600 known such settlements within 3 months, and to expel any Bulgarian and Romanian Roma that commit crimes. The authorities of Bulgaria and Romania have promised to cooperate with respect to this issue.