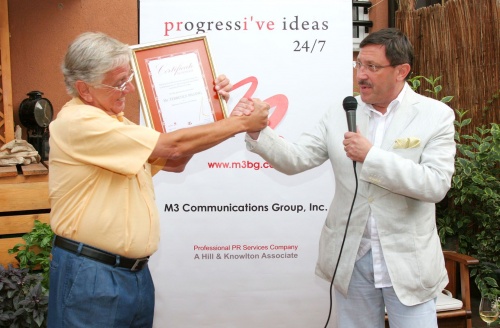 The anniversary was marked with a cocktail in Sofia organized by the CEO of M3 Communications Group, Inc., Maxim Behar, a renowned Bulgarian businessman, journalist, and PR expert.

The guest of honor of the event was one of the most popular PR professionals in the world - Terence Billing, Executive Vice-President of Hill & Knowlton Inc., who was the person signed the global company’s associate partnership agreement with M3 Communications 10 years ago.

The honorary guest congratulated M3 Communications Group, Inc. for the professionalism it demonstrated throughout the last decade, and expressed his confidence that the team of the Bulgarian PR leader will be serving its clients with even greater care and creativity in the future.

“I advise everybody in the world of business nowadays to stay aware of the East; of China, India, Korea and even Turkey. Globally speaking, these countries will soon present a lot of surprises, which will also affect our sphere of expertise – public relations, branding and image-making,” Billing declared.

During the celebration the M3 Communications CEO Maxim Behar presented the Executive Vice-President of Hill & Knowlton Inc. with a certificate declaring him an Honorary Chairman of the Board of Directors of M3 Communications Group, Inc.

The largest Public Relations & Public Affairs company in the world Hill & Knowlton, part of WPP Group plc, of which Bulgaria’s M3 Communications Group, Inc., has been an associate since 2000, has about 100 offices in 72 countries worldwide, and provides its services to 380 companies listed in Fortune 500, the annual list of top corporation compiled by Fortune magazine.