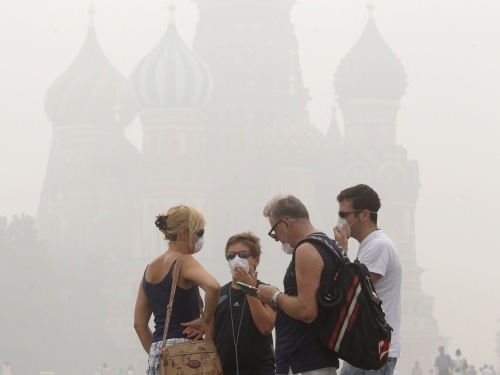 Tourists wore masks to avoid breathing the smog caused by peat and forest fires that has engulfed Moscow while in the background the Kremlin, one of Russia's most famous landmarks, was barely visible. Photo by EPA/ BGNES

The air in Moscow on Wednesday morning is clean and there is no smog, the Russian RIA Novosti has reported.

According to the news agency, the smog eased on Monday evening and continued to ease on Tuesday.

Caused by the devastating wildfires, the smog is finally leaving the Russian capital after the concentration of harmful substances in the air exceeded the norm 7 times and health experts have warned that breathing was as dangerous as smoking several packs of cigarettes per day.

The dangerous smog was caused by the wildfires that have been devastating Russia for weeks.

These were the worst fires in modern Russian history. The national death toll attributed directed to wildfires was above 50 and up to 2000 homes have been destroyed.