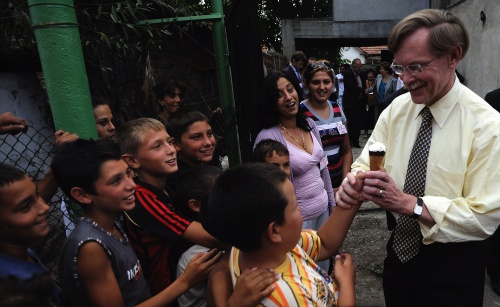 Zoellick, who is on an official visit to Bulgaria August 9-11, was joined by Bulgarian education minister Sergey Ignatov, social minister Totyu Mladenov, and mayor of Sofia Yordanka Fandakova on his trip to the Roma neighborhood.

The World Bank President met representatives of the Roma foundation Romani Baht, as well as residents of Fakulteta, who had a chance to share their troubles with him.

Among topics discussed was Roma education, housing, the poor infrastructure of the neighborhood and the prevalent unemployment.

1500 students have classes in the Roma neighborhood, but representatives complained about the quality of education and requested that Roma children study in schools in other neighborhoods, instead of having their own Roma-quarter schools.

Sofia mayor Yordanka Fandakova on her part expressed support for an initiative to give Roma materials for the construction of proper houses, on the condition that they do that with their own work.