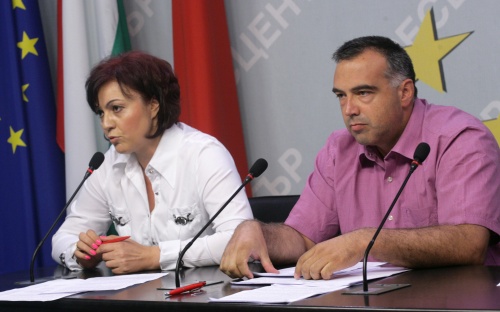 The Bulgarian Socialist Party, the former party of Diaspora Minister Bozhidar Dimitrov, has demanded his sacking over the controversial statements that he made over the past week after the discovery of the relics of St. John the Baptist in Sozopol.

“Bozhidar Dimitrov cannot remain in politics. Otherwise Prime Minister Borisov will suffer a lot of negative backlash that he personally did no cause,” stated Anton Kutev, spokesperson of the Bulgarian Socialist Party with respect to Dimitrov’s statements in some of which he spoke of the Bulgarians and the archaeologists in Bulgaria as “fucking people”. Dimitrov subsequently refused to apologize for his statements and made further controversial remarks about the Bulgarian women.

“After these words, Dimitrov must really quit politics, and must start dealing with something that does not have to do with the “fucking” people. I would ask him to apologize to me and to the Bulgarian Socialist Party. This “fucking people” is paying Dimitrov and Borisov’s salaries, and if Dimitrov does not want to apologize, the Prime Minister must do that for him,” Kutev declared.

He explicitly added that Dimitrov must quit politics altogether because there was a likelihood that if he is axed as a “minister of miracles” (Kutev apparently referred to Dimitrov’s promotion of archaeology finds – editor’s note), he might become a Member of Parliament, and still get paid by the “fucking people.”

“The “bad human material” has become a “fucking people”,” declared in turn another BSP MP, Korneliya Ninova, who reminded of a controversial statement that Bulgarian PM (then Sofia Mayor) Borisov made in Chicago in February 2010 in which he referred to much of the Bulgarian population as “bad human material.”

Bulgaria’s Minister without a portfolio in charge of Bulgarians abroad and of state policy on religions, Bozhidar Dimitrov, is a famous historian known for his nationalist views, focusing much of his research on medieval Bulgaria, the ancient Buglarians, Macedonia's role in Bulgarian history, and relations with contemporary Macedonia.

He is a former member of the Council of the Bulgarian Socialist Party, and a former Director of the Bulgarian National History Museum. He is also known to have been a collaborator of the former State Security service of the communist regime spying most notably on the Vatican.

Dimitrov gave up the post at the National History Museum upon joining the Borisov government of the center-right GERB party in the summer of 2009 as a Minister without a portfolio in charge of the Bulgarians Abroad and of religions. Dimitrov is famous for making controversial comments - such as the one that Bulgaria may veto Turkey's EU accession.

At one point Bulgarian PM Borisov joked that he was afraid that some day, upon coming home from a visit abroad, he might find out that Dimitrov had declared war on some of Bulgaria's neighbors.