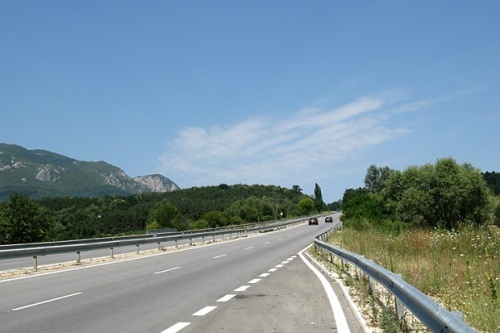 Parts the road between the Bulgarian coastal towns of Sozopol and Primosko are very dangerous and have been sites of several deadly accidents. Photo by BGNES

The Bulgarian “Road Safety” Association has provided BNG 60 000 to improve the conditions on the road between the Bulgarian coastal towns of Sozopol and Primorsko.

The central dividing line will be marked with paint which has Swarovski crystals, making it extremely bright and visible, even in downpours and thick fog.

On the extremely dangerous turn known as the “Staviiski Turn” the crystals will be larger for increased effect. This is the spot where, in August 2007, world skating champion, Maxim Staviiski, driving after the use of alcohol, crashed his SUV in another vehicle, leaving 24-year-old Petar Petrov dead, and 18-year-old Manuela Gorsova in a coma. In January 2008, Staviiski received a suspended sentence of 2.5 years for DUI.

The Association further announced they will install on the dangerous turn road signs with diamond foil, because they will be also visible from afar.