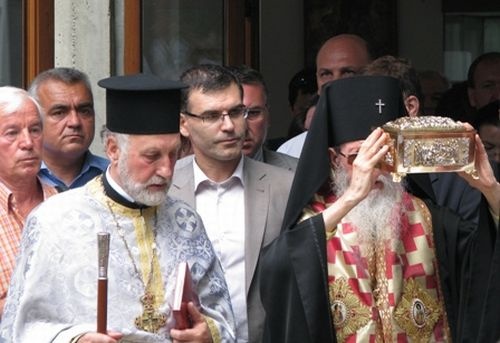 Sliven Bishop Yoanikiy led the procession with the relics of St. John the Baptist in Sozopol. Finance Minister Simeon Djankov is in the middle, while the man who discovered the relics, Prof. Kazimir Popkonstantinov is on the far left. Photo by Finance Min

Several Bulgarian ministers will be working on the drafting of a National Strategy for the development of cultural and historical tourism.

The news was broken Sunday by Bulgaria's Finance Minister and Deputy Prime Minister in charge of the economy Simeon Djankov.

Djankov said that he, together with Minister of Economy, Energy, and Tourism Traicho Traikov and Culture Minister Vezhdi Rashidov, will be working on a joint strategy for the development of tourism in Bulgaria with respect to the cultural and historical heritage of the nation.

The news comes about a week after Bulgarian archaeologists discovered what is believed to be relics of St. John the Baptist in the Black Sea town of Sozopol. This discovery, however, led to a dispute between Bulgarian Diaspora Minister Bozhidar Dimitrov and leading archaeologists.

Finance Minister Djankov explained that the drafting of the national cultural tourism strategy has been “ordered” by Prime Minister Boyko Borisov.

The Bulgarian Archaeologists' Association has also expressed its desire to take part in the drafting of the strategy. For the time being, the government has made no mention about the archaeologists' request.

He further announced that the Bulgarian government was going to allocate sufficient funds for the completion of the troubled tourist center at the Ancient Thracian city and fortress of Perperikon, located near Kardzhali, which a year after the start of its construction consists of a 10-meter deep crater.

“We are currently working on changing the project to make it cheaper, and we will resume the construction right after that,” Djankov said.

In his words, the Bulgarian government will try to find money to fund the reconstruction of the road from the city of Kardzhali to the village of Podkova close to the Makaza Pass on the border with Greece, which will be a “convenient route” for the international tourism traffic.

The road to the Makaza Pass is supposed to be part of the Pan-European Transport Corridor No. 9 leading from Helsinki, Moscow and Kiev to the Greek port of Alexandroupolis on the Aegean.