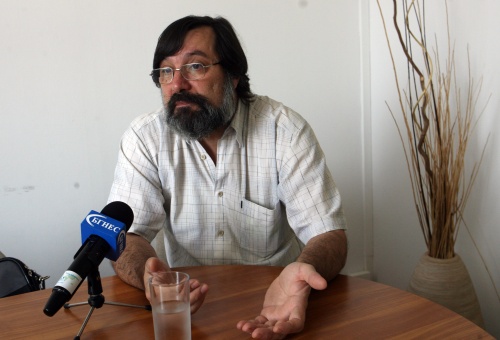 The Bulgarian archaeologists are astounded by the negative statements with respect to them that Diaspora Minister Bozhidar Dimitrov made after the recent discovery of relics of St. John the Baptist.

This has been declared by Prof. Totko Stoyanov, Chair of the Bulgarian Archaeologists' Association and Deputy Dean of the Department of History of the Sofia University, as cited by BGNES.

Stoyanov has commented on Dimitrov's statements in which he claimed that the archaeologists who questioned the authenticity of the relics of St. John the Baptist in Sozopol last week were envious of the achievements of the man who found them, Prof. Kazimir Popkonstantinov.

Subsequently, Dimitrov, who is a leading historian, got into a renewed conflict with perhaps the most famous Bulgarian archaeologist, Prof. Nikolay Ovcharov as the two exchanged insults and mutual accusations over the media on Thursday and Friday.

Prof. Stoyanov explicitly expressed the surprise of his colleagues at Dimitrov calling the Bulgarians and the Bulgarian archaeologist “fucking people”.

He said the Archaeologists' Association will most likely come up with a special statement with respect to the finding of St. John the Baptist's relics and with respect to Dimitrov's statements for which they expected he wound apologize.

“We cannot accept such language on part of a statesman, a minister, a government representative, in any situation, especially of a person who is professionally affiliated with our field as a historian,” stated Stoyanov.

He explicitly made it clear that such “wording” deeply disappointed his colleagues and hurt Bulgarian's international image.

He further defined the “media campaign” about the discovery made by Prof. Kazimir Popkonstantinov in Sozopol as “too hysterical,” and even said this “promotional campaign” might be connected with “economic projects” made up in advance.

Stoyanov was critical of the Bulgarian government for granting an immediate subsidy of BGN 420 000 for the restoration of a church in Sozopol that will host the holy relics at a moment when the money for the Bulgarian Academy of Sciences has been reduced significantly.

As a specialist on Ancient Thrace, Stoyanov has declined to comment on another of the Diaspora Minister's statements widely deemed insulting – his comparison of the Ancient Thracians to “mutri”, Bulgarian sportsmen-turned-gangsters from the 1990s.

The head of the Bulgarian Archaeologists' Association expressed his surprise at the statements that Sozopol will turn into a “Bulgarian Jerusalem” with the laying of the St. John relics in state.

“It is somehow very easy for us in Bulgaria to put labels and create bombastic theories,” stated Prof. Stoyanov.

He pointed out that if the relics turn out not to belong to St. John the Baptist, it will be the minister who will be responsible for that.

“Bozhidar Dimitrov prevents the archaeologists from speaking calmly about their discoveries. It was him not the archaeologist Popokonstantinov who declined the proposed tests of the relics,” explained Stoyanov.

In his words, the Bulgarian Archaeologists' Association wanted to take part in the crafting of a 7-year national strategy for the development of cultural tourism.

He also warned that the recovery of the Bulgarian antiques captured in Canada will not be very easy as treasure hunting is a “well-structured business sector”. He called upon the entire Bulgarian society to participate actively in the fight against treasure hunting.

“The barbarian raids of the treasure hunters are continuing, they are happening at this very minute. There is no way to recover a destroyed tomb, settlement or another kind of object. The archaeological finds removed from their site have no context and cannot provide information for its history. This is really said,” Stoyanov concluded.