Wildfires Cause Foreign Ambassadors in Russia to Leave 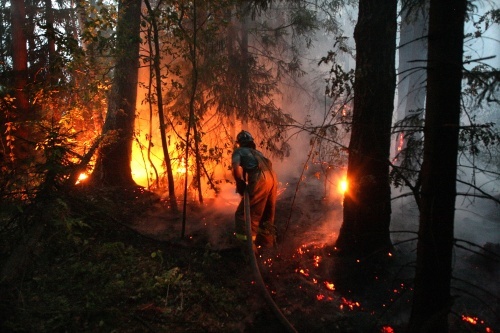 Russian firefighter works to extinguish a fire in a forest near the village of Ryazanovskiy, about 150 km from Moscow, Russia. Photo by EPA/BGNES

The embassies of Poland, Austria and Canada have withdrawn a large number of their diplomats in Moscow because of the thick smog cause by the wildfires in Russia.

The Russian radio “Echo of Moscow” announced Sunday that Moscow continues to be consumed in thick smog and the level of carbon monoxide are 6,5 times more than the maximum allowable concentration.

France has announced it will sent out an aircraft to help put out the wildfires, Italy has also sent two firefighting planes to Russia.

Poland has sent 155 firefighters. Germany has also decided to help Russia by sending 100 000 protective masks, as well as water hoses, pumps and generators.

95 of the top Bulgarian firemen have also been sent to help Russia with its fight against the devastating forest and peat fires.

Russia’s biggest concern is that the fires may unleash toxic substances in nuclear plants or in areas with a high level of toxicity, like the relatively close located Ukrainian nuclear power plant Chernobyl.

Russia’s Ministry for Emergency Situations has announced that there has been a stabilization of the forest and peat fires around Moscow for the first time in two weeks.

For the first time in the last 24 hours the put-out fires around Moscow have outnumbered the newly started ones.

According to an official from the Ministry for Emergency Situations, the number of people who have died in the devastating wildfires has reached 52. Thousands of people's homes have also been destroyed.