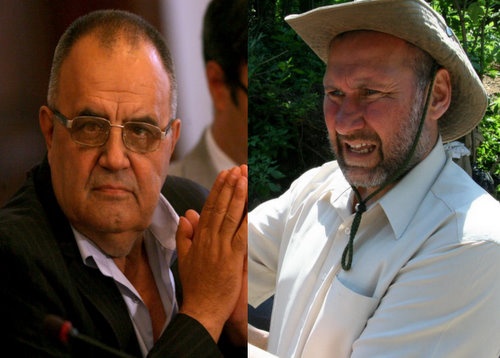 The finding of relics of St. John the Baptist in Sozopol has spurred anew the conflict between Diaspora Minister Bozhidar Dimitrov (left) and archaeologist Nikolay Ovcharov (right). Photos by BGNES

Bulgaria’s Diaspora Minister and renowned historian Bozhidar Dimitrov has entered into an exchange of insults with perhaps the most famous Bulgarian archaeologist Nikolay Ovcharov over the recent discovery of the relics of St. John the Baptist in Sozopol.

The fight broke out over Dimitrov’s statement from Tuesday published in a Sofia daily newspaper in which he slammed certain archaeologists for being envious of Prof. Kazimir Popkonstantinov, the man who found the relics of St. John the Baptist, and for criticizing Popkonstantinov and Dimitrov himself for celebrating the discovery before carrying out the proper tests.

“Why, damn it, why, where is all this envy coming from?! This is what I cannot find an explanation with this fucking people, with these fucking colleagues,” the Diaspora Minister and a former Director of the Bulgarian National History Museum, said when expressing his indignation that some of the Bulgarian archaeologists had declared the triumph over the relics of St. John the Baptist premature.

“Please don’t interpret literally the words of a 65-year-old nationalist who has proven himself to the Bulgarian people. I did not say “fucking people, fucking colleagues”. The second part of this sentence makes it clear that I had in mind a group of people calling themselves archaeologists. You can see from the context of the conversation that this does not refer to the entire Bulgarian people and its qualities. I am condemning several archaeologists, who had made anonymous statements in the press, and who did not express doubt but, rather, envy and hate for their colleague. I was just defending out colleague Popkonstantinov,” Minister Dimitrov told Darik Radio Friday.

He further identified Prof. Nikolay Ovcharov as the main critic from among those “anonymous archaeologists”. This has resulted from a comment by Ovcharov published Friday in the 24 Chasa Daily.

“I am starting a discussion. Today Ovcharov came out with his name, and started quarreling with me. The “fuckers” are no longer anonymous. We are now going to be fighting personally, with our names,” Dimitrov said.

Friday’s article by archaeologist Nikolay Ovcharov has appeared as a reaction to earlier statements by Dimitrov – the above-mentioned one about the “anonymous” envious archaeologists and another one about the civilization of Ancient Thrace.

In his first comment, Dimitrov states that he did not know who those anonymous archaeologists doubting the discovery of the holy relics were, but that he would take care of those “shepherds” when he found out. This statement is a word play with the last name of Professor Ovcharov (“ovchar” meaning “shepherd” in Bulgarian).

In his second comment Dimitrov talks disparagingly about the civilization of Ancient Thrace, in which he compares the Thracians to modern-day Bulgarian “mutri” (i.e. former wrestlers turned gangsters) for their boisterousness and their affinity for gold; he further claimed that medieval Bulgarian monuments and documents were more important (Ancient Thrace flourished in the 6th-3rd century BC, while the medieval Bulgarian state was set up on the same territory in the 7th century), and that today’s archaeology in Bulgaria had turned into an epitome of “primitive thinking” designed for the “mass public.”

In his Friday’s comment in the 24 Chasa Daily, Ovcharov, who is known for exploring the Ancient Thracian sanctuary and fortress Perperikon, is visibly agitated by Dimitrov’s comments.

“I fail to understand where Dimitrov’s hatred for Thracian culture originated. He is a student of Alexander Fol (i.e. the founder of Thracian Studies in Bulgaria – editor’s note). Just several years ago in his capacity as the Director of the National History Museum he was generously funding research of Ancient Thrace, including my digs at the Tatul sanctuary. Speaking behind someone’s back is not my style. Two years ago when I did not agree with Dimitrov’s thesis about the Boyana Church, I gave a press conference,” explains Nikolay Ovcharov in his article in the 24 Chasa Daily.

The conflict between Bozhidar Dimitrov and Nikolay Ovcharov goes back two years ago when Dimitrov claimed he had established the identity of the mysterious muralist of the 13-th century Renaissance like-images in the Boyana Church near Sofia, a UNESCO World Heritage site.

Ovcharov disputed Dimitrov’s claims, which has unleashed into a war of words in which both researchers criticized each other’s work and discoveries going as far as outright insults.

“I must point out that after the opening of the reliquary allegedly holding the relics of St. John the Baptist on Sunday I decided to remain quiet about the identity of the relics. This is how I answered the questions posed to me by the 24 Chasa, the Trud Daily and other media, and they can confirm this. I am going to keep quiet on that in the future as well,” states Ovcharov in the article clearing himself from the claims made by Dimitrov that he slammed Popkonstantinov’s find out of envy.

Bozhidar Dimitrov is a famous historian known for his nationalist views, focusing much of his research on medieval Bulgaria, the ancient Buglarians, Macedonia's role in Bulgarian history, and relations with contemporary Macedonia. He is a former member of the Council of the Bulgarian Socialist Party, and a former Director of the Bulgarian National History Museum.

He gave up the latter post upon joining the Borisov government of the center-right GERB party in the summer of 2009 as a Minister without a portfolio in charge of the Bulgarians Abroad and of religions. Dimitrov is famous for making controversial comments - such as the one that Bulgaria may veto Turkey's EU accession. At one point Bulgarian PM Borisov joked that he was afraid that some day, upon coming home from a visit abroad, he might find out that Dimitrov had declared war on some of Bulgaria's neighbors.

Prof. Nikolay Ovcharov is perhaps the most famous Bulgarian archaeologist at present. He is known for researching the ancient Thracian settlements Tatul and Perperikon in the Rhodope Mountains and the medieval Bulgarian capital Veliko Tarnovo. Sometimes called "The Bulgarian Indiana Jones", Ovcharov has been often criticized by his colleagues for seeking to achieve media sensationalism with his public appearances and demonstrations of his finds.