Komorowski Inaugurated as President of Poland 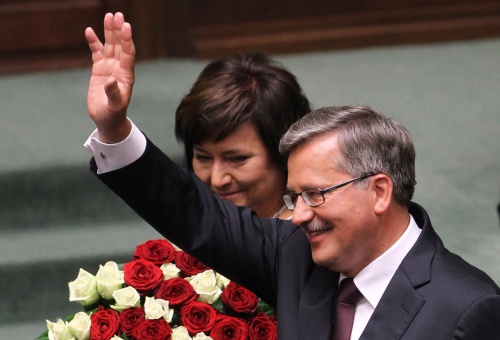 Bronislaw Komorowski and his wife, Anna, during the inauguration ceremony in Warsaw, Poland. Photo by EPA/BGNES

Bronislaw Komorowski has been sworn in as the new President of Poland, after he won the elections in July.

Poland had to hold elections after President Lech Kaczynski died in a tragic plane crash in April.

The social conservative Komorowski, who ran as the candidate of the center-right governing party “Civil Platform”, won 53,01% of the votes, while his rival, the conservative Jaroslaw Kaczynski, who was the twin brother of the former president and former PM of Poland, received 46,99% of the votes.

Komorowski will be the fourth president of Poland since the fall of communism.

Lech Walesa and Aleksander Kwasniewski, two of the former democratically elected presidents of Poland, were present at the Komorowski's inauguration in Warsaw.

The 55-year-old president, who comes from an aristocratic family, is a father of five. His wife, Anna, was also present at the inauguration ceremony.

According to a BBC correspondent, during the president's five-year term, Poland will go through a relatively rare period of political stability.