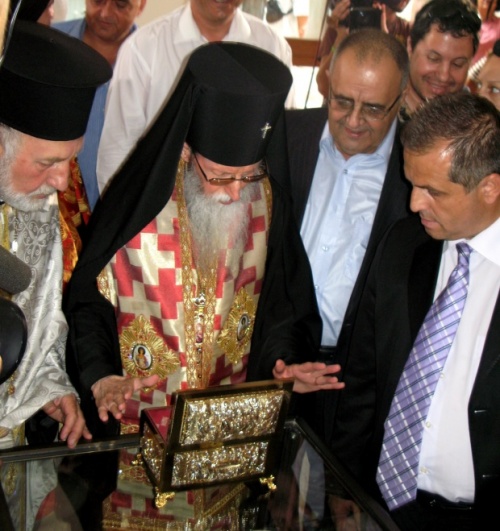 Sliven Bishop Yoanikiy (center left) and Diaspora Minister Bozhidar Dimitrov (middle right) look at the relics of St. John the Baptist before laying them in state in the St. George Church in Sozopol. Photo by Darik News

The recently discovered relics of St John the Baptist have been laid in state in Bulgaria’s Sozopol after a transfer processing which brought much excitement and euphoria in the Black Sea town.

The procession led by the Bulgarian Orthodox Bishop of Sliven Yoanikiy brought the relics of St. John the Baptist from the St. Ivan Island to the St. George Church in the downtown where they were laid in state.

Thus, the holy relics have been officially transferred from the archaeologists to the Bulgarian Orthodox Church. The procession that transferred the relics of St. John the Baptist to the St. George Church in Sozopol was led by Sliven Bishop Yoanikiy, who carried the small sarcophagus with relics above his head. Bulgaria's Finance Minister Simeon Djankov is in the middle, while the man who discovered the relics, Prof. Kazimir Popkonstantinov is on the far left. Photo by Finance Ministry

Thousands of Bulgarians as well as dozens of buses with foreign tourists – Germans, Russians, Poles, Czechs - having their vacations along the Bulgarian Black Sea coast have immediately arrived on a pilgrimage trips to pay their respects to the relics of St. John the Baptist.

The samples from the reliquary and the bones are still to be tested by specialists have expressed their views that there is no doubt whatsoever that absolutely unique archaeological discovery consists of relics of St. John the Baptist.

The wide-ranging arguments for that start with the fact that the small sarcophagus was found in a “natural architectural environment” - hidden under the major slabstone on the floor of the St. John the Forerunner Church – the oldest church on the St. Ivan Island.

(The island off the Sozopol coast itself is named St. John the Baptist – as Ivan is the Bulgarian/Slavic name for John.)

Experts have pointed out that at the time of the building of the St. Ivan the Forerunner Church – 4th century AD – the tradition was to build in relics of saints in the construction instead of to lay them in state for pilgrims, and there was no intentional falsifications of such holy items.

“It is important to understand one thing – this is the first time ever in the world archaeological practice that relics of St. John are found together with an inscription which just literally nails the conclusion and leaves no doubts. There are no speculations here,” said the man who made the unique discovery, archaeologist Prof. Kazimir Popkonstantinov. Professor Kazimir Popkonstantinov (left), who found the relics of St. John, together with Finance Minister Simeon Djankov (right), explaining why the origin of the relics is absolutely certain. Photo by BNT

“I think that this is the discovery of the year, not just in the Bulgarian archaeology but also in the European archaeology. It is hard to speak of the symbols of early Christianity but Apolonia (i.e. the Greek name of Sozopol) and the St. Ivan Island were one of the earliest places where Christians settled as they were persecuted by the Roman authorities. Their heritage is connected with the entire Christian history,” explained the Director of the Burgas Regional History Museum Tsonya Drazheva who is also part of the archaeological team that found the relics of St. John.

The relics of St. John the Baptist will lay in state in the St. George Church in Sozopol until the completion of the repairs of the larger St. Cyril and St. Methodius Church nearby.

Once the larger church is completed, the relics of St. John will be transferred there, together with two other holy items already kept in Sozopol – the a piece of the Holy Cross of Jesus Christ donated to the town by the Bulgarian Prime Minister Boyko Borisov and the National History Museum, and relics of St. Andrew, which were donated to the town by the Ecumenical Patriarch of Constantinople Bartholomew I during his visit to Sozopol last month.

On Wednesday, the Bulgarian government allocated additional BGN 420 000 for completing the renovation of the St. Cyril and St. Methodius Church which will be the home of the holy relics. Prime Minister Boyko Borisov

“As soon as this amazing archaeological discovery was made, I made some research, and found that such finds generate great returns from tourism and pilgrimage. Bulgaria and this region will now enter the world tourism maps as a pilgrimage site. The fact that this is a sea resort provides for an unique combination between cultural and sea tourism,” declared Bulgaria’s Finance Minister Simeon Djankov who participated in the procession carrying the relics together with Diaspora Minister Bozhidar Dimitrov, a Sozopol native. The uninhabited St. Ivan Island (upper left corner) in the Black Sea off the coast of the resort town of Sozopol is the place where the relics of St. John the Baptist were discovered by a team of archaeologists led by Prof. Kazimir Popkonstantinov. Photo by 4coolpics.com