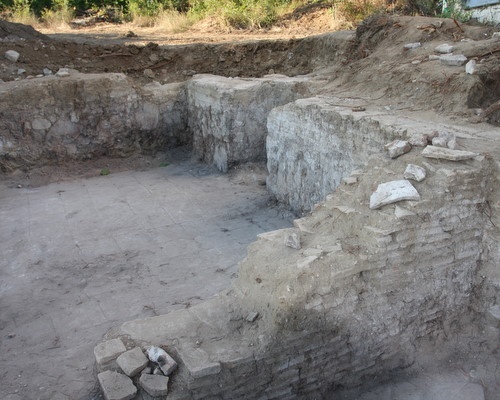 View of part of a building at the Late Antiquity fortress near Byala. Photo by BGNES

Bulgarian archaeologists have explored further a Late Antiquity fortress located near the town of Byala on the St. Atanas Cape on Bulgaria's Black Sea coast that they found last year.

The team of archaeologists from the Varna Archaelogy Museum led by Prof. Dr. Valeri Yotov has uncovered a number of new details of the early Byzantine fortress, including what is believe to be the discovery an ancient winery.

The “winery” consisted of two stone buildings connected with an wooden passage. One of the buildings was filled up with grapes, which was then pressed with large rectangular stones.

According to the archaeological team, similar wineries have been found the Caucasus, the Crimean Peninsula, Serbia, Israel.

Yotov has pointed out that there are several supposed ancient wineries found in Bulgaria but none of them has been explicitly proven to have been used for wine-making so the tests, whose results are yet to come out, might make the new discovery the first properly uncovered ancient winery in the country.

He said the last such “winery” was found in Israel at the beginning of 2009, and is believed to have been the largest in the Byzantine Empire.

Yotov thinks the winery of the fortress near Byala was part of a monastery. He also said the tourists who already visited the site of the still ongoing excavations in the fortress were impressed the most by the winery.

His team has been digging near Byala after they rediscovered the fortress near the Cape of St. Atanas last summer.

They have already uncovered an early Christian church and much of the fortress walls.

The fortress near Byala is located on an area of 38-40 decares, and is dated back to the time of the Byzantine Emperors Anastasius I (491-518 AD), and Justinian I (527-565 AD). The only previously known information about the fortress comes from a note from 1892 of the brothers Hermingild and Karel Skorpil, the founders of Bulgarian archaeology, and a short expedition in the 1970s. Ancient Greek geographer Strabo mentions in his writings of a fortress called Larisa to the south of Odessos (today's Varna) but it is still unclear whether the fortress discovered by the Bulgarian archaeologists is in fact Larisa.