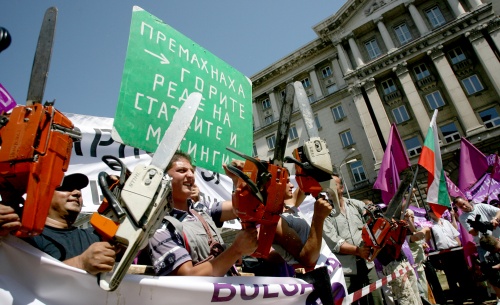 10,000 marched in Bulgaria's capital Sofia June 2009 in a trade union protest against the policies of the previous cabinet, which was nearing the end of its term in office, amid looming economic crisis and growing unemployment. Photo by BGNES.

Bulgaria's trade unions voiced disaffection proposals for reforms in the retirement system voted Wednesday by the government and threatened protests over what they saw as a “drastic impediment to accessing the right to retirement.”

Wednesday the Bulgarian cabinet voted a draft for amendment of the Law on Social Security proposed by labor minister Totyu Mladnov which, if adopted by Parliament, will up the retirement requirement for work experience, as well as the retirement for people engaged in hard labor.

The Confederation of Independent Bulgarian Trade Unions (KNSB) and the Podkrepa Labor Confederation – Bulgaria's two trade unions – came out with a joint statement denouncing the proposals as in effect obstructing access to retirement for many persons who have faced periods of unemployment.

They disagreed with the overall philosophy of the draft amendments, saying they will contribute nothing to the sustainability of state retirement funds. The trade unions shared their view that the retirement system can be stabilized only by upping revenue, not by cutting down spending.

KNSB and Podkrepa moreover expressed frustration at PM Boyko Borisov's failure to live up to a prior commitment to introduce reforms that are agreed upon by all parties involved and saw the voting of the draft today as rushed.

Among the measures proposed by trade unions are stronger efforts in the collection of social security contributions, including criminalization of failure to pay them. They called for measures to be taken so that state retirement pensions can be adequately updated in the future.

KNSB and Podkrepa expressed particular disappointment at the upping of the retirement age of persons involved in hard or dangerous labor (so-called first- and second-degree labor), without a corresponding improvement of their working conditions.