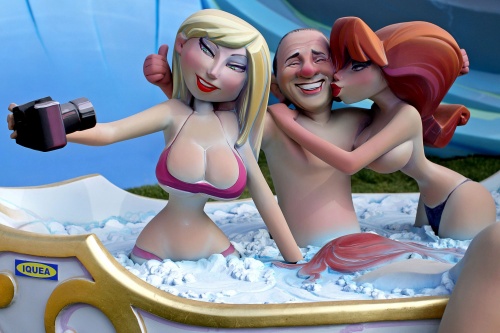 A parodic sculpture of Italian PM Silvio Berlusconi, taking a bath with two women, was presented at a festival in Spain. Photo by EPA/BGNES

The Italian PM Silvio Berlusconi got involved in another sex scandal, this time for sharing bed with 3 girls.

The 38-year-old Maria Teresa de Nicolo, who worked as a prostitute told prosecutors that Berlusconi has given her presents after she shared a bed with him and two other women.

“I, the two girls from Rome and Berlusconi were in bed,” the woman said, as cited by The Guardian.

According to her, there have been about 15 more women at the party she attended. She has also stated that they have all received jewellery as a gift from Berlusconi.

De Nicolo is one of the numerous women who have claimed they have been paid by a businessman to attended dinners at the Italian PM's private residence in Rome in the period of 2008-2009.

She has also stated that she received EUR 1 000 from the Italian businessman Gianpaolo Tarantini, who is under investigation for alleged corruption in the health service in the south-eastern region of Puglia.

De Nicolo is the second woman who has claimed to have spent the night in Berlusconi's residence after last year the 43-year-old escort Patrizia D'Addario made the similar confessions.

Later, D'Addario published a book, in which she revealed details about the time she spent with the Italian PM and praised him for his sexual stamina, saying that he “deserved a place in the Guinness Book of Records”.

De Nicolo's sex confessions come in a moment when Berlusconi is facing a political crisis after splitting with the co-founder of his political party, “People of Freedom”.