Bulgaria's Interior Minister: Release of 'Killers' to Have Consequences 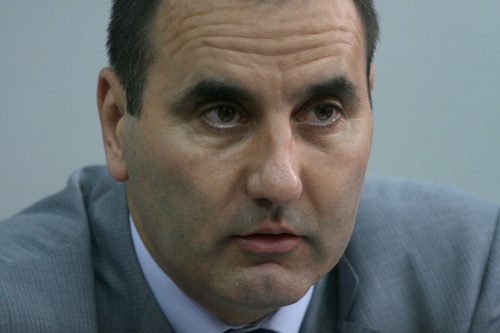 The Bulgarian Interior Minister Tsvetan Tsvetanov has said that he starts to believe that the statement "the mafia has its country" might be true. Photo by BGNES

Bulgaria's Interior Minister Tsvetan Tsvetanov has announced that the releases of the suspects from the high-profile cases “Killers” and “All Trumps” will have serious consequences.

“The release of the suspects will prevent further investigation on the “Killers” case,” Tsvetanov said Wednesday in an interview for the Bulgarian private TV channel bTV.

He has denied the speculations that the government is planning to merge judiciary and the executive authorities. He said, however, that he tends to believe the statement that the mafia has a country.

“I have always hoped that there will be change and judicial will so that Bulgaria can manage to get out of the hole that it has been in for the past 20 years,” he said.

Taking about the judiciary, Tsvetanov also stated that maybe more people need to be added to the staff and that the vicious circle, which affects the Bulgarian citizens, should be put to an end.

The interior minister has also added that since the “Killers” gang has been released, there are now premises for someone to be eliminated, in order not to unravel the chain.

“Let this lay on the conscience of the court and the magistrates that took this decision yesterday,” Tsvetanov said.

On Tuesday, the Bulgarian Court of Appeals decided to release on bail four out of the five men, arrested in the much advertised “Killers” special police operation.

The five men were detained on July 23 during a police operation, which targeted an organized crime group carrying out gangland murders. They have been accused of murdering controversial football boss Yuri Galev, who was brutally shot June 20, and died in hospital ten days later.

Yanko Popov, Vasil Kostov, Georgi Petkov and Petar Stoyanov were released because, according to the magistrates, there was no sound evidence that the five men are connected to the murder of Galev.

Stoyanov, aka the Chieftain, is the most high-profile among them, because he is the President of the Bulgarian Sumo Federation and an adviser to the Bulgarian Parliamentary Committee on sports, youth, and education.

Metodi Ivanov is the only one who remains in jail because an illegal AK-47 Kalashnikov gun has been found in his home, not because his alleged connection with the Galev assassination has been proven.

The “Killers” police operation was carried out at five locations in Bulgaria - Sofia, Varna, the northern Bulgarian town of Cherven Bryag, the Black Sea resort town of Kiten, and the town of Samokov near Sofia.

On Tuesday, the Court of Appeals has decided to also free on bail the three arrested during the special police operation”All Trumps”.

The three have been charged with large-scale tax evasion and money laundering.

The magistrates stated Tuesday that there was not enough evidence that Kitova has been a part of the scheme, so there was no criminal group of two people. They have also said that it is not clear whether there have been a damage on the state at all.

The three were released because of Kitova's health condition and because, according to the magistrates, there was no danger that they will hide or conduct another crime.

The Court of Appeals have confirmed last week's statement by the Sofia City Court that the charges are not specific enough.

According to the Prosecution's Office, Krasteva and his daughter have registered companies for the export of scrap and iron in Romania and Hungary to avoid paying very large sums in Value Added Tax (VAT).