Bulgarian Archaeologists Agitated over Relics of St John the Baptist 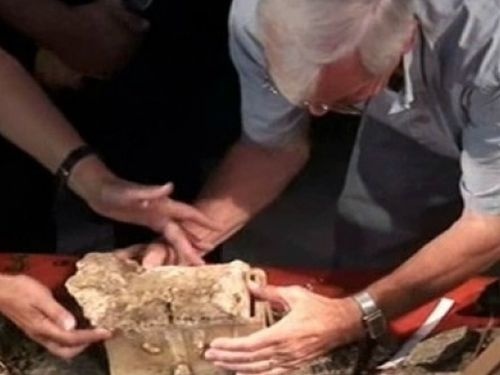 Pictured: the opening of the small sarcophagus said to hold relics of St. John the Baptist. Photo by bTV

The discovery of relics of St John the Baptist in the Black Sea town of Sozopol has caused jealousy among Bulgarian archaeologists, according to Diaspora Minister Bozhidar Dimitrov.

Bulgarian media have published several opinions of archaeologists wishing to remain anonymous saying that the authorities were too fast to declare that the relics found in Sozopol actually belonged to St. John the Baptist.

Bulgaria’s Culture Minister Rashidov has urged calm over the discovery. Diaspora Minister and renowned historian Bozhidar Dimitrov, however, has expressed absolute certainty in the fact that the relics found on the St. Ivan Island belonged to St. John the Baptist. He has pointed to an inscription on the marble sarcophagus holding the relics as the greatest evidence for their origin.

“The other archaeologists are shaken by wild envy of their colleague, Professor Kazimir Popkonstantinov. He is a rarely lucky man. It is very seldom that one would find an inscription, and in archaeology the inscription is considered the most authentic proof,” stated Dimitrov, who is a former Director of the Bulgarian National History Museum and a native of Sozopol.

The inscription in question found on the reliquary states that “some time in the 5th century a man named Toma transferred the holy relics exactly on the birthday of St. John the Forerunner.”

Disgruntled archaeologists quoted by a number of Bulgarian media have not really questioned the authenticity of the relics but the sensational way it was presented to the public without carrying out first the respective tests. Some have pointed out that the bones can only be dated but that there is no way of actually proving that they belonged to one of the founders of Christianity.

Many have expressed discontent with the “sensational” nature of Bulgarian archaeological discoveries in the past few years. They explain this approach with the attempt of some of the members of their professional community to attract sponsors for their digs.

Despite the doubts, the special procession which is going to bring the relics of St. John the Baptist to the St. George Church in Sozopol is scheduled for Thursday. According to the Bulgarian 24 Chasa Daily, Prime Minister Boyko Borisov has order a special silver sarcophagus for the relics, for which he is going to pay with money of his own.