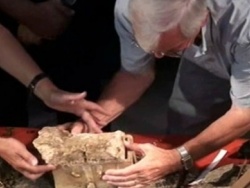 Pictured: the opening of the small sarcophagus said to hold relics of St. John the Baptist. Photo by bTV

Bulgaria’s Culture Minister Vezhdi Rashidov has called upon the media not to speculate over the recent archaeological discovery of relics of St. John the Baptist in the Black Sea town of Sozopol.

“The find near Sozopol is very engaging and pleasant. But we have to wait for the results from the tests. Emotional statements are nice but one should be careful with them. Take me, for example. When I found that we are going to have 25 000 square meters for a museum in Sofia, I exclaimed that this will be the “Bulgarian Louvre,” Rashidov stated Tuesday when asked about the alleged relics of St. John the Baptist.

According to Bulgaria’s Diaspora Minister and notable historian Bozhidar Dimitrov, there is no doubt that the relics found in Sozopol belonged to St. John the Baptist.

According to Dimitrov, who is himself a native of Sozopol, the monastery of the St. John the Forerunner Church in Sozopol was one of the largest in medieval Bulgaria and Byzantium, and had an imperial status. Many of its leaders rose to the ranks of becoming Patriarchs of Constantinople. His surmise is that the Constantinople Patriarchate presented to holy relics of St. John the Baptist to the Sozopol Monastery.

Dimitrov believes that Sozopol can become a “Second Jerusalem” because the local church St. George already has a piece of the Holy Cross, and relics of St. Andrew.

The relics of St. John the Baptist are also to be donated to the St. George Church in the town, the Sozopol Municipality announced. The ceremony will include a parade with the participating of Finance Minister Simeon Djankov and Diaspora Minister Bozhidar Dimitrov.