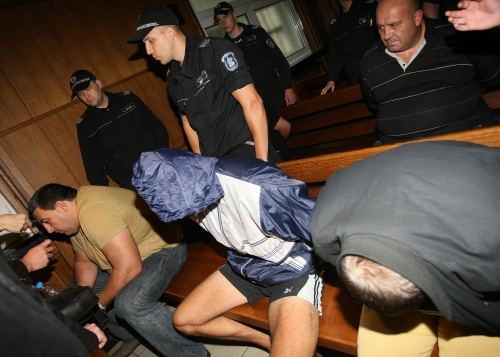 4 of the 5 "Killers" were released on bail by the court on Tuesday. Petar Stoyanov aka The Chieftain is the one on the far left. Photo by BGNES

The Bulgarian Court of Appeals has decided to release on bail four out of the five men, arrested in the much advertised “Killers” special police operation.

The five men were detained on July 23 during a police operation, which targeted an organized crime group carrying out gangland murders. They have been accused of murdering controversial football boss Yuri Galev, who was brutally shot June 20, and died in hospital ten days later.

Yanko Popov, Vasil Kostov, Georgi Petkov and Petar Stoyanov were released because, according to the magistrates, there was no sound evidence that the five men are connected to the murder of Galev.

Stoyanov, aka the Chieftain, is the most high-profile among them, because he is the President of the Bulgarian Sumo Federation and an adviser to the Bulgarian Parliamentary Committee on sports, youth, and education.

Metodi Ivanov is the only one who remains in jail because an illegal AK-47 Kalashnikov gun has been found in his home, not because his alleged connection with the Galev assassination has been proven.

The “Killers” police operation was carried out at five locations in Bulgaria - Sofia, Varna, the northern Bulgarian town of Cherven Bryag, the Black Sea resort town of Kiten, and the town of Samokov near Sofia.

The formal charges filed by the Prosecutor's Office were as follows: Yanko Popov, aka Tutsi, was charged with ordering the murder of Galev. Petar Stoyanov, aka the Chieftain, was charged with organizing and heading an organized crime group, as well as being an accomplice in its activities. Georgi Petkov aka Damchi was charged for willfully attempting to murder and murdering Yuri Galev. Vasil Kostov and Metodi Ivanov are charged with being Petkov's accomplices in the activities. The latter three are also accused on other counts relating to Galev's murder.

The release of the four "Killers" came just after the Bulgarian Interior Minister Svetan Tsvetanov has once again slammed severely the judicial authority in Bulgaria for what he sees as inadequate decisions.