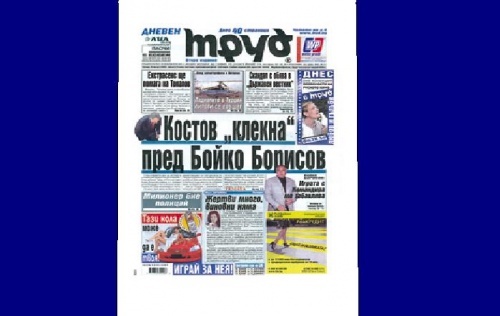 Bulgarian daily Trud, owned by WAZ, is the second most-circulated newspaper in the country. File photo

German WAZ Media Group is gradually pulling out of the Balkans, but their business in Bulgaria remains unchanged, according to Deutsche Welle, citing WAZ Director Bodo Hombach.

Just one day earlier in an interview for the German daily Handelsblatt Hombach voiced the intentions of the company to leave Southeastern Europe, beginning with Serbia and Romania.

In Bulgaria, WAZ owns dailies Trud and 24 Chasa – some of the most widely circulated Bulgarian newspapers.

“We have no agreements about Bulgaria. The interests and the offers that have been put on the table are no grounds for any imminent deal. Rumors are constantly circulating, but they most often come from people who wish to buy our publications. We are not influenced by rumors – we look at numbers, at the offer, at future possibilities for development, then we assess and discuss,” Hombach is quoted saying, adding WAZ can sell but is not at all forced to do so.

Regarding Serbia, the Director states the fight there is between democratically oriented politicians who want to have the rule of law and the oligarchs who fully ignore their contract obligations, but points out the situation in Bulgaria is different.

Hombach further says the print media market is shrinking globally and the future belongs to electronic media – a trend WAZ intends to follow.

“The goal now is not to print newspapers, but to have high-quality journalism. News is not that valuable nowadays. One gets it as a gift. What matters are causes and connections, analysis,” the WAZ Head explains, but further states print media in Bulgaria is stable and has stable readership.