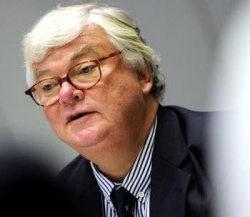 Bodo Hombach, director of German WAZ Media Group, which operates many newspapers in the region, has voiced sharp criticism of abuse of power and collusion between governments and oligarchs throughout South-Eastern Europe, writes German daily Handelsblatt Monday.

Speaking about a planned complete pull-out of the region, Hombach said that it is motivated by the unfavorable business climate caused by “widespread abuse of power.”

“The close intertwining of oligarchs and political power is poisoning the market,” stated Hombach.

In Bulgaria, WAZ owns dailies Trud and 24 Chasa – some of the most widely circulated Bulgarian newspapers.

In Serbia, WAZ is staging a pull-out planned to end by the end of 2010 after a full-scale conflict with the Serbian government on the occasion of WAZ's failed bid to buy daily Novosti.

Handelsblatt writes that Serbia is a “special case” for WAZ, for it was even “chased out of the country” by the government.

Nevertheless, the WAZ director feels an overall lack of trust for the whole region of South-East Europe.

“Oligarchs in the Balkans are more and more buying for themselves in order to exert political influence, not in order to win money. We cannot stand up to such market-destroying competition,” said Hombach.

In Monday's Handelsblatt WAZ director Bodo Hombach denied WAZ's venture into the Balkans to be his creation, saying ironically “this honor does not belong to me.”

“Precisely because I've known the Balkans very well and for a long time, I didn't want to export any WAZ models there and I advised to step in more carefully,” said he.

Hombach, who has held senior positions in the German federal government and is a member of the Social Democratic Party, was EU Special Coordinator of the Stability Pact for South-East Europe , 1999-2002, before becoming the head of WAZ.

Hombach further expressed worries about the economic and political development of Serbia, as well as its EU accession, styling the WAZ conflict there as a “test case.” He vowed to inform relevant EU commissioners of what WAZ experienced in Serbia.

Handelsblatt reports a “dramatic” drop of foreign direct investments to Serbia, from USD 2.99 B in 2008 to USD 1.92 B in 2009, writing that “Foreign investors are holding themselves ever more strongly at a distance from Serbia.”