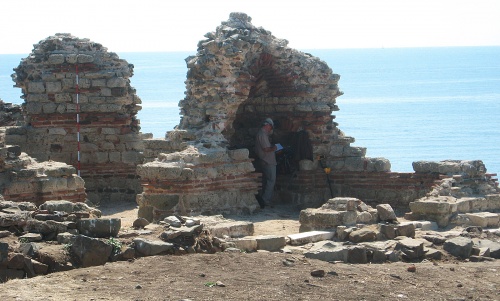 Bulgarian archaeologists claim that the reliquary with the relics of St. John the Baptist, found in the souther Black sea town of Sozopol, is the first ever around the Bulgarian coastline.

Archaeologists investigating the Sv. Ivan (St. John) island off Sozopol found on July 28 the exquisite reliquary – a relic urn, built in the altar of an ancient church bearing the name of ST. John the Baptist. This is the oldest church on the island and it dates back to 5th century BC.

At the official opening of the relics on Sunday, the head of the archaeological team, Prof. Kazimir Popkonstantinov, stated that the reliquary was made out of alabaster and not of marble, as they have previously thought.

“An anthropological analysis is to be done soon,” he added.

The Bulgarian Minister without Portfolio, Bozhidar Dimitrov, who was present at the opening ceremony, has stated that from now on, Sozopol will be the new Jerusalem.

“The Sozopol church “St. George” currently owns a piece of the Holy Cross, donated by the PM Boyko Borisov. Also, the Ecumenical Patriarch Bartholomew has also given us the relics of St.Andrew. These are essential Christian relics of the oldest saints,” Dimitrov said, adding that besides sea tourism, Sozopol could also develop pilgrimage tourism.

“Pilgrimage tourism is very popular worldwide and it provides 30% of the revenues from the tourism industry,” he said.

At the opening ceremony on Sunday, the archaeologists stated that the reliquary included parts of an arm, heel, tooth and a facial bone.

The head of the archaeological team, Prof. Popkonstantinov, has given the relics to the Bishop of Sliven, Joanikii, who is supposed to decide where the relics should be lying in state.

According to the Bulgarian Minister without Portfolio, the relics should be placed in the “ST. George” church near Sozopol.