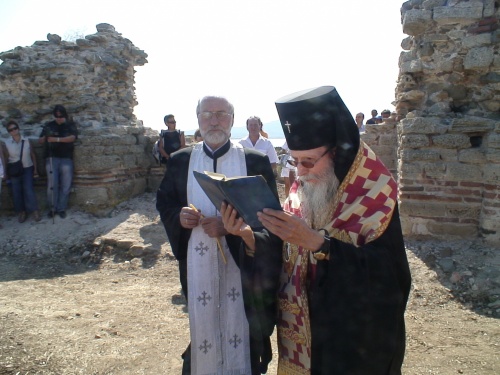 The Bishop of Sliven, Joanikii, shoud decide where the relics of St. John the Baptist should be lying in state. Photo by BGNES

Bulgaria's Minister without Portfolio has stated that the relics of Saint John the Baptist, found in the Bulgaria's southern Black sea town of Sozopol, were probably donated by Constantinople.

“We suppose that in ancient times, someone from the Patriarchate of Constantinople has donated part of the holy relics to the monastery “St. John the Forerunner”,” Minister Bozhidar Dimitrov said Sunday, adding that the archaeological interest towards the Sv. Ivan island dates back to about 25 years ago.

Dimitrov participated in the official ceremony Sunday, which was attended also by a committee of specialists, MPs and journalists.

The archaeologists have announced that the relics of St. John the baptist include parts of an arm, heel, tooth and a facial bone.

The head of the archaeological team, Prof. Kazimir Popkonstantinov, has given the relics to the Bishop of Sliven, Joanikii, who is supposed to decide where the relics should be lying in state.

According to the Bulgarian Minister without Portfolio, the relics should be placed in the “ST. George” church near Sozopol.

On July 28, archaeologists investigating the Sv. Ivan (St. John) island off Sozopol found an exquisite reliquary – a relic urn – built in the altar of an ancient church bearing the name of St. John the Baptist.

The reliquary has the shape of a sarcophagus and was discovered by the team of Prof. Kazimir Popkonstantinov.