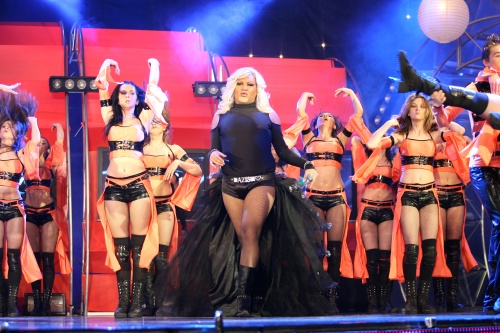 Platinum blond Azis, the openly gay King of Bulgaria’s popfolk, has one aim not only on the stage, but in real life as well – to break stereotypes and provoke. Photo by Sofia Photo Agency

For the first time ever Bulgarians have the chance to join a symbolic protest against the widespread popfolk music or chalga - as it is derogatorily called – following an initiative on the global social network Facebook.

More than 9000 Facebook users, united in a group, have called on Bulgarians to voice their discontent with the controversial popfolk music on August 1 by playing any kind of song, different from chalga, at midday.

“Let's each of us, at 12.30 on August 1, play our favorite rock song (or any other type of music, different from chalga), no matter where we are, and turn it up real loud,” says the statement of the organizers.

Provocative hip-shaking, scanty clothing, lewd lyrics, oriental motifs, fake eyelashes and tons of make-up – the ingredients of Bulgaria’s popfolk music or chalga have been making a furore over the last few years, cementing its status as nothing short of a social phenomenon and a stereotype for Bulgaria.

After years of austerity during the communist regime, the long-overdue opulence and anti-institutional flavor that this music brings has turned into a lifestyle and is considered prestigious.

The music huge popularity has even altered the country's image abroad. Only last month two of the most respected media outlets in the world – Reuters and New York Times – picked platinum blond Azis, the openly gay King of Bulgaria’s popfolk, as the most exotic, interesting and important person in the country, drawing parallels to its political life and Bulgarians’ lifestyle.