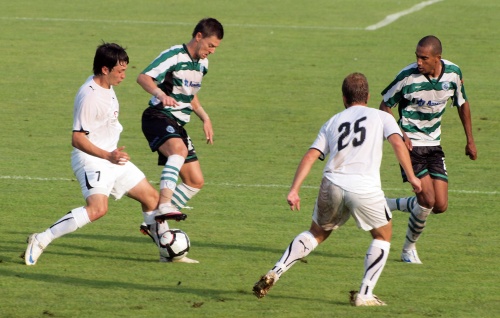 Varna's Cherno More (green and white) on their way to winning 2:1 their first national championship match, against Blagoevgrad's Pirin. Photo by BGNES.

Only for the third time in history, the first round of the Bulgarian National Football Championship will include a match between top teams and arch-rivals CSKA and Levski.

The game, styled as the “eternal derby” of Bulgarian football, is to be played Sunday at the Vasil Levski National Stadium in Sofia.

Sofia police announced that it had taken all measures necessary to ensure the security at the event and to prevent all acts of hooliganism.

The first round of the championship kicked off with five games Saturday:

Slavia's goalkeeper Rays Mboli – the goalie of the Algerian national football team who played at World Cup 2010 – let Kaliakra's Georgi Filipov slip past him the first goal in this season's national championship.