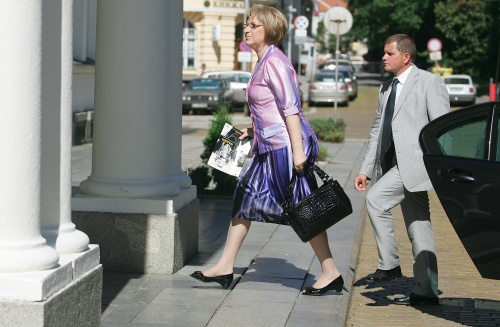 Police in Veliko Tarnovo confirmed earlier reports that one of the two Romanians arrested for assaulting the security guards of the Bulgarian Parliament Speaker is a director of Rompetrol Bulgaria.

According to the director of the Veliko Tarnovo Regional Directorate of the Ministry of Interior, the person, named “Nikita Octavian” presented himself as a “member of the board of directors of Rompetrol Bulgaria,” which information was confirmed by the police.

The person, together with his companion, “Pinzaro Ionut”, are already formally charged by the regional Prosecutor's Office with mayhem and preventing police officers to execute their duties. They have been detained for 72 hours.

The identity of the Rompetrol Bulgaria senior official in question is still not entirely certain, making it possible that he actually is the company's CEO. It is unclear whether Bulgarian media is quoting the names of the persons with their family names first. Both Octavian and Ionut are common Romanian given names.

According information from Rompetrol Bulgaria's website, the name of the company's CEO is Sorin Octavian Nichita. The individual detained is referred to as “Nikita Octavian.”

The two individuals, "in a manifestly inebriated condition," attempted to enter the Winepalace restaurant , which was reserved for Tsacheva and organizers and official guests of the Stage of the Ages festival held in Veliko Tarnovo over this and next weekend.

The officers called reinforcements to detain the offenders.

On the other hand, according to the Romanians' lawyer, there has been no physical contact whatsoever between his clients and the police and security officers. Moreover his clients were allegedly talked to only in Bulgarian, they were insulted and detained without knowing what was going on.