Bulgarian Socialists Muster 'Will to Change, Strength to Act' 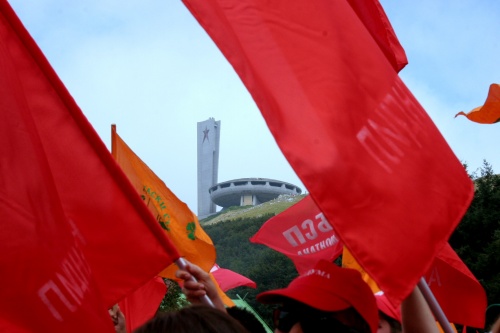 The traditional gathering marks the 1891 founding of the Bulgarian Social-Democratic Party – to which the Socialist Party is an heir – by Dimitar Blagoev and fellow socialists. Buzludzha is also the site of a historic battle in the 19-century fight for independence of Bulgaria.

This year's event bears the motto “Will to Change! Strength to Act!”, which reflects the ongoing bid of the Socialist Party to repair its record low voter support.

“We must make our party ready for political battles and elections,” said socialist leader Sergey Stanishev at Buzludzha, reports Dnevnik.bg.

He further called for “internal consolitation” of the Bulgarian left, voicing fierce criticim of current GERB-led Bulgarian government in which he said that the GERB cabinet had brought Bulgaria's development backwards.

At this year's gathering a special emphasis was put on the socialist youth organization, which received a party award.