Tsarevets: The Castle of the Bulgarian Spirit 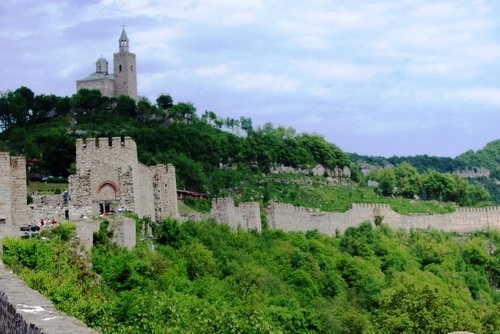 If you plan a history trip around Bulgaria, then the Tsarevets fortress is the place to visit.

It is situated in Veliko Tarnovo, a city in the central part of northern Bulgaria which served as the capital of the Second Bulgarian Empire (1185 – 1396) and the home of the Bulgarian Tsars from that period.

The fortress Tsarevets is located on the central part of a hill with the same name, where the earliest evidence of human presence dates back from the 2nd millennium BC.

Veliko Tarnovo became the capital of the Second Bulgarian Empire in 1185 AD, after the uprising of the Bulgarian brothers Asen and Peter. It was a revolt of the Bulgarians living in the Byzantine Empire and was caused by an increase of the imperial taxes that led to resurrecting the independent medieval Bulgarian state conquered by Byzantium in 1018 AD.

After creating the new Empire, the brothers made Tsarevets the main fortress and it was considered the most impregnable and the most important one in Bulgaria, often compared with Rome and Constantinople in magnificence.

However, in 1393, Tsarevets was conquered by the Ottoman forces and burned down. The restoration of the fortress began in 1930 and was completed in 1981, in honor of the 1300 anniversary from the establishment of the Bulgarian state (681 AD).

Due to the magnificence and historical value of the place, Tsarevets has been turned into an archaeological museum with guides who can tell the story of the fortress in Bulgarian, English, French, German and Russian.

The complex is surrounded by thick walls and has three gates. The palace features a throne room, a palace church and a royal residential part and is situated on an area of 4872 sq.m.

The patriarchate is situated on the top of the hill on an area of about 3 000 sq.m. Modernist style frescoes have been displayed inside after the reconstruction of the church. 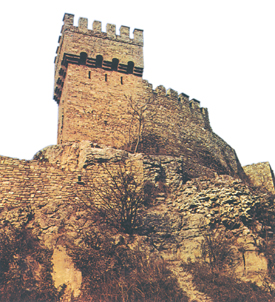 Only one of the towers of the Tsarevets fortress has been reconstructed. It is called the Baldwin’s Tower because it is located at the place of the original medieval tower where Baldwin I, Emperor of the Latin Empire of Constantinople (which existed in 1204-1261 AD) found his death as a prisoner of the Bulgarian Tsar Kaloyan, the younger brother of Asen and Peter.

Baldwin of Flanders was captured in the Battle of Adrianople in 1205, in which the Bulgarian forces routed the army of the Latin Empire crusaders, who had set out to conquer Jerusalem but instead took the Byzantine capital Constantinople in 1204.

According to the legend, Baldwin rejected the courtship of Tsar Kaloyan’s wife and she accused him of raping her. Baldwin was blinded by an incandescent skewer and after that thrown from a rock in the precipice where the Yantra River flows.

However, besides glorious moments, Tsarevets has also seen many treacheries. One of the most outrageous is the story of Ivanko who killed his own cousin, Tsar Asen I, after Asen scolded him for having an affair with his wife’s sister.

After killing his cousin and usurping the throne, Ivanko married the Byzantine princess Theodora Angelina, whose maternal grandparents were the Byzantine Emperor Alexius III Angelus and Euphrosyne Doukaina Kamaterina. After series of treacheries and fighting for and against Byzantine, Ivanko was captured through a deception.

Tsarevets was also the home of the fourth ruler from the Asen dynasty – Ivan Asen II, son of Asen, who was the first Bulgarian Tsar to mint golden, silver, billon and copper coins. During his rule, the borders of the Bulgarian state had once again reached three seas as they did in the 10th century.

According to archaeological discoveries, there were about 400 residential and administrative buildings, over 22 churches and 4 monasteries on the Tsarevets hill, all dating back from the Middle Ages.

During the summer months, Tsarevets becomes a major tourist point because of the audiovisual show “Sound and Light”, which could be seen almost every evening.

The attractive show has been organized since 1985 on the square in front of the fortress.

It features three lasers, variegated lights, dramatic music and bells. The changing colors, lightening the castle, tell a different part of the story of Tarnovo - from the glory to the fall of the fortress to the Ottomans.

For three years now, Tsarevets has been used as a stage for the summer opera festival “Stage of the Ages”. This year’s edition of the festival will be held from July 30 to August 8.