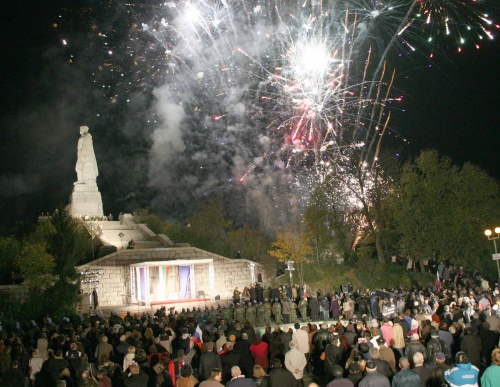 In 2007 the residents of Plovdiv celebrated the 50th year since the opening of the Alesha Monument. Photo by BGNES

Aleksey Skurlatov, the soldier who served as the model of Bulgaria’s most famous Soviet Army monument, has received a medal from the Bulgarian President.

Skurlatov is the man whose picture from 1944 was used by Bulgarian sculptors to design the Monument of Alesha in the city of Plovdiv, a monument representing Bulgaria’s gratitude to the Soviet soldiers.

The Red Army veteran, who now resides in the Altai Republic in Central Russia, has been award a medal entitled “65 Years since the Victory over Fascism”. The medal was presented to Skurlatov on Thursday by local governor Alexandr Karlin.

“Aleksey Skurlatov is venerated in Bulgaria as an honorary citizen. We have given to Aleksey Ivanovic an invitation on part of the Bulgarian authorities to visit their country,” stated Viktor Krasilov, a local activist of the United Russia party who brought the medal from Bulgaria, as cited by ITAR-TASS.

In 1944, in his capacity as a signalman, Aleksey Skurlatov participated in repairing the telephone connection between Plovdiv and the Bulgarian capital Sofia, reminds ITAR-TASS.

This is when a historic photograph was made of him that was later used by Bulgarian sculptors to design the monument symbolizing the unknown Soviet warrior named Alesha, which is still towering above today’s city of Plovdiv.

The Alesha monument is 11 meters in height, and is located on the Bonardzhik Hill in Plovdiv. It consists of the figure of a Soviet Army soldier with his head turned to the east, holding down a Shpagin machine pistol in one hand.

The monument was built in 1954-1957. It is the most famous Communist Era monument in Bulgaria with even the Soviet Army Monument in Sofia paling in comparison to it.

In 1966, Soviet composers created the Alesha anthem, which was the official anthem of Plovdiv until 1989.

In 2007, the Plovdiv residents marked the 50th birthday of the Alesha monument. It is said to be the largest granite monument in the world.