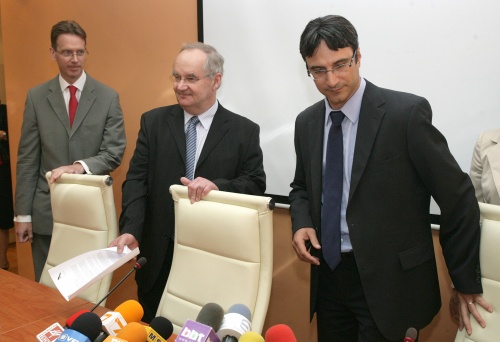 Natural gas prices in Bulgaria will go down in the fall of 2010 as a result of extraction from three new deposits discovered by UK-based company Melrose resources.

The three new natural gas deposits – Kaliakra, Kavarna, and Karvana East – are located in the very northeast of Bulgaria, in the Black Sea off the Kaliakra Cape.

The discovery of the new deposits was announced Wednesday by Bulgaria’s Economy Minister Traicho Traikov together with the CEO of Melrose David Archer and UK Ambassador to Bulgaria Steve Williams.

Archer has pointed out that the new deposits are a real commercial discovery, and that the company will start laying pipes for the extracting of the natural gas in August.

“Our own production will reduce the average price of natural gas in Bulgaria. This will be in addition to the reduction of the price of the Russian natural gas that we may achieve in our talks with Gazprom. The natural gas from these new deposits will be 5%-10% cheaper than the price that we will request from Russia,” explained Bulgaria’s Economy Minister Traikov.

The three new deposits discovered by Melrose contain over 3 billion cubic meters of natural gas which will guarantee 20% of Bulgaria’s annual consumption (20% = 500 million cubic meters) over a period of 6 years.

Minister Traikov promised that during its sitting next week the government is going to grant Melrose a concession for the newly found deposits.

He has pointed out that the strategy of the Cabinet provides for developing Bulgaria’s own production of natural gas, and that he expected the discovery of new deposits, including of shale gas, in the northern part of the country.

Melrose is also cooperating with the Bulgarian government for constructing the future Galata natural gas storage facility, which will be the second of its kind in the country in addition to the existing storage facilities at Chiren. The Galata facility is located close to the spot where the Russian-sponsored gas transit pipeline South Stream is expected to enter Bulgarian territory after starting at Novorossyisk in Russia, and going through the Black Sea for about 900 km.