Italian PM Under Fire for Taking Pic of Leonardo Masterpiece 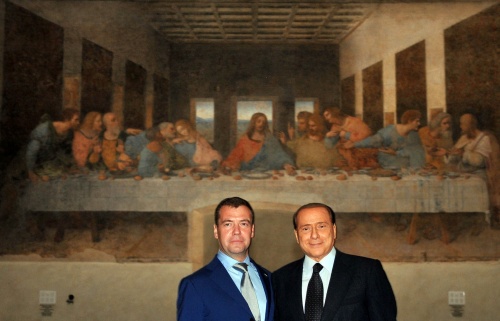 The Italian public, politicians and media are voicing strong criticism of Italian Prime Minister, Silvio Berlusconi, for taking a picture with Russian President, Dmitry Medvedev, in front of Leonardo's “The Last Supper.”

The two took the photograph during Medvdev's visit to Milan on July 23 while Berlusconi was showing his guest the monastery Santa Maria delle Grazie where Leonardo Da Vinci painted “The Last Supper.” Medvedev voiced his desire to have a picture in front of the famous painting, which the Italian PM fulfilled immediately.

Taking pictures of the masterpiece is strictly banned over preservation concerns.

Members of the Italian Parliament are quoted by the Bulgarian news agency BGNES attacking Berlusconi with demands of explanation why the rules can be broken for certain people.

“The Last Supper” was created by Leonardo between 1495 and 1498 for his patron Duke Ludovico Sforza and his duchess Beatrice d'Este. It represents the scene of The Last Supper from the final days of Jesus as narrated in the Gospel of John 13:21, when Jesus announces that one of his Twelve Apostles would betray him. At the time the Master worked parallel on other projects.

As early as 1517 the painting was starting to flake. By 1556—less than sixty years after it was finished — Leonardo's biographer Giorgio Vasari described the painting as already "ruined" and so deteriorated that the figures were unrecognizable.

From 1978 to 1999 Pinin Brambilla Barcilon guided a major restoration project which undertook to permanently stabilize the painting, and reverse the damage caused by dirt, pollution, and the misguided 18th and 19th century restoration attempts.

For these reason taking pictures of the painting has been banned and strictly reinforced.