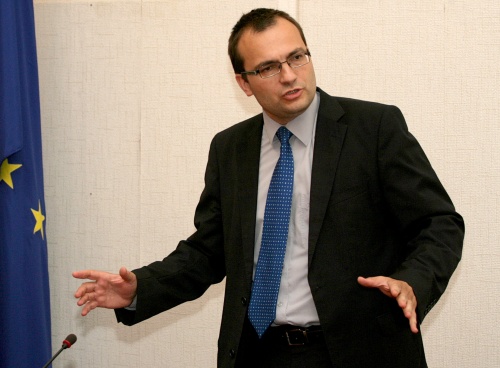 According to the leader of the Bulgarian Union of Democratic Forces, Martin Dimitrov, holding elections would be cheaper after the implementation of electronic voting. Photo by BGNES

The Bulgarian Union of Democratic Forces (UDF) have announced they will propose the implementation of electronic voting at the local elections next year.

“This is the only way to prevent trading with votes and falsification of the electorate lists,” said Boris Markov, chair of the campaign headquarters of the party.

Markov has explained that the idea is for the voting to happen through election terminals (machines that look like ATMs) and with the ID card of the voter. The vote would be registered on paper for a better security.

“This will allow people who cannot be present at their address at the time, to still submit their vote,” he said and added that the USA and some European countries are practicing this method successfully.

“The machines would be used many times and in this way the voting process would be cheaper. Currently, holding of elections would cost about BGN 20 M,” said Martin Dimitrov, leader of the democrats.

According to the ruling party GERB, electronic voting should be implemented only after it has been tested in a few sections in the country during next year's local and presidential elections.

The ruling party has proposed a fully distant voting, from a personal computer at home, for example. The voting would happen after receiving a special code, similar to an electronic signature.

However, this suggestions has not been approved yet.