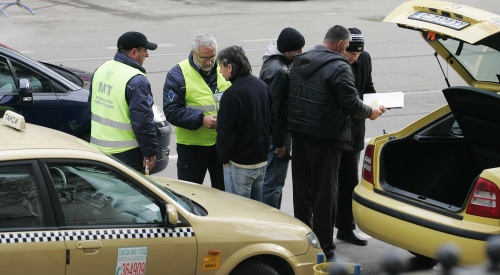 The Sofia Municipality is finally going to impose a maximum price on cab services. Photo by BGNES

Sofia Municipality has come very close to setting a maximum legal price on taxis in the capital city.

The price ceiling will be introduced with the agreement of the taxi firms in Sofia, announced Deputy Sofia Mayor Lyubomir Hristov.

The maximum prices will be regulated with a decree of the Transport Ministry. The only taxi price regulation in Bulgaria so far requires that the initial fee and telephone order fee should be no more than half of the fee per kilometer.

The Transport Ministry has suggested that the respective municipal councils determine the taxi price ceilings on their territories, and that they should be updated at least once a year; these will then be included in the regulations of the Ministry.

Hristov has explained that the maximum price for cab services will most likely be based on a formula taking into account a number of variables – such as the fuel prices, the condition of the car, the payment of the driver.

In his words, Bulgaria cannot apply the Irish model where the cabs have a uniform price set by the state because the service is not comparable in the various part of the country.

The Deputy Sofia Mayor believes the new price-setting initiative should be made part of the Car Transport Act together with a regulation setting a maximum allowed number of cabs for a certain territory. The legislative changes will also provide for a BGN 3000 fine and a revoking of the cab permit if a driver charges clients above the maximum allowed price that will be introduced.

There are 5 280 legal taxis in Sofia, each of which pays BGN 50 per year for the respective permits.