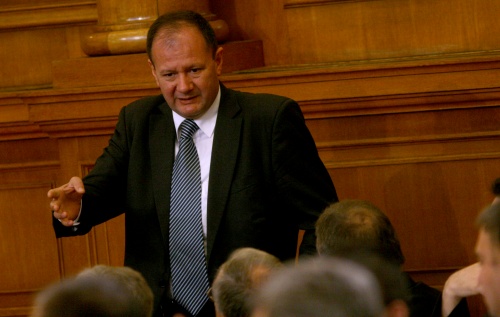 Bulgarian socialist Mihail Mikov was among those who opposed Friday in Parliament the creation of so-called "specialized courts" for high-profile cases. Photo by BGNES.

Members of the opposition Bulgarian Socialist Party and Movement for Rights and Freedoms voiced staunch opposition to the bills. Representatives of Bulgaria's bar also provided arguments against.

The idea for the creation of special courts – or “mafia tribunals” – to hear high-profile cases was initially launched by GERB Minister of Interior Tsvetan Tsvetanov in the spring as an approach to combating organized crime and a feature of Bulgaria's ongoing judicial reform.

The proposal provoked criticism on the part of political opposition, judges, lawyers, as well as some media, who said that the measure would lead to depriving the judiciary from its independence, will hurt the general separation of powers in the state and would lead the country away from the rule of law.

Bulgaria's ruling GERB party vowed to press on with the creation of the special court in the wake of the EU Commission latest progress report, in which the Commission praised Bulgaria's efforts in combating crime and corruption, but requested more reforms.

Friday the parliamentary Committee on Legal Affairs convened for an extraordinary meeting to discuss amendments to the Criminal Procedure Code and the Law on the Judicial System intended to create the specialized courts.

Members of both the Socialist Party and the Movement for Rights and Freedoms opposed the procedure and called upon justice minister Margarita Popova to come out with a position on the proposed legislation.

Mihail Mikov from BSP, Minister of Interior from the previous cabinet (2008-9), said that the government needs the new legislation because it feels it arrested in this year's so-called 'special police operations' too many people against whom the persecution didn't have enough evidence. According to Mikov, the government allegedly needs to ease the proceedings against those persons to retain credibility for the actions of the Ministry of Interior.

Mikov also criticized the drafts for inconsistencies and unclarity in wording and definitions.

According to a representative of the Bulgarian Supreme Bar Council, the legislative proposal is badly motivated and there are no relevant arguments whatsoever for the introduction of specialized courts. She also expressed concerns about the protection of human rights in Bulgarian. According to the lawyers' representatives, an improvement in the professionalism and efficiency of the prosecution and criminal investigation is what would help out fighting with crime.