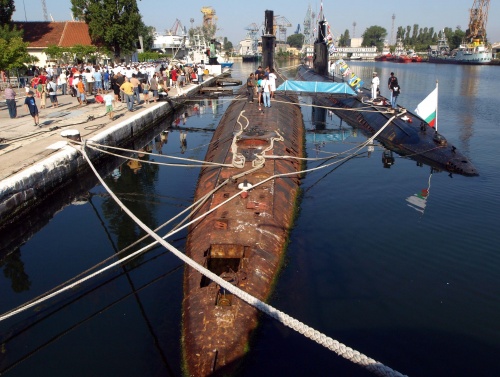 In August 2009, the Bulgarian Navy had an open-door day dedicated to the 55 years since the restoration of its submarine force. Photo by BGNES

Bulgaria’s armed forces will most likely do away with their submarine unit, according to Defense Minister Anyu Angelov.

According to the Minister, the life of the only operational Bulgarian submarine “Slava” (i.e. “Glory”), has expired, and it will probably be retired in the coming months which will mean shutting down altogether Bulgaria’s submarine force.

“Calling it a submarine force is too strong because any such unit must include at least two vessels. As you know, we have only one submarine. Its life has expired, and thus the submarine component of the Bulgarian Navy probably won’t exist any more,” declared the Defense Minister in Varna where he observed the international naval drills call “Breeze/Sertex 2010.”

Bulgaria’s submarine force was formally set up as an individual unit during World War I, in 1916. After the end of the war, however, it was shut down as part of the provisions of the Treaty of Neuilly-sur-Seine of 1919 in which the Allies banned Bulgaria from having submarines.

The only other Bulgarian submarine that was operation in the recent years was the Nadezhda (i.e. “Hope”); it has practically been retired for ten years because it lacks a battery. At the beginning of 2009, the Bulgarian Navy considered turning it into a museum.

The mid 1980s, and especially 1983-1985 were the “height” of the Bulgarian submarine force with four fully operational submarines. Two of them were retired immediately after the fall of the communist regime in 1989 because of lack of funds.

In August 2009, the Bulgarian Navy celebrated with an open-door day 55 years since the restoration of its submarine force (see picture).

In 2007, the general staff of the Bulgarian Navy promised that its modernization strategy will provide for purchasing two new submarines, the first of which was supposed to arrive in Varna in 2012. However, these plans have seen little development.

Speaking in Varna on Friday, Bulgaria’s Defense Minister Angelov declared that the army, the air force, and navy must restructure in a way that would allow them to carry out their tasks in spite of any temporary budget constraints.

He revealed that in changes in the structure of the three types of armed forces will be made public in September, and that they will be decided by the commanding staffs of each of these.

“The three types of military forces will continue to exist because they feed the battle spirit of the Bulgarian Army,” Gen. Angelov said.

He also mentioned that the Bulgarian Navy was still supposed to receive three more Panther helicopters from the government’s much troubled procurement deal with Eurocopter. In his words, Bulgaria’s has already paid 60% of the price, and will now pay the remaining 40% as the 2010 Revised State Budget Act is entering into force, and will provide the necessary funds.