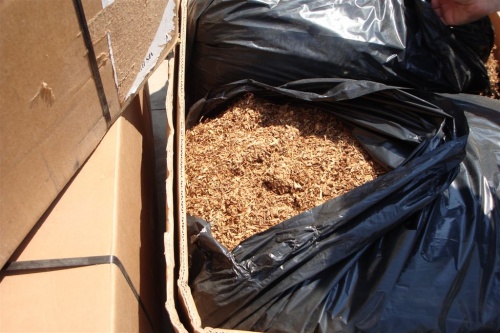 The tobacco shipment detained Friday in Russe was hidden behind cardboard boxes in a truck. Photo by the Bulgarian Customs Agency.

The Bulgarian customs authorities reported Friday that they detained a smuggling shipment of 6 tons of tobacco headed for Romania in Bulgarian Danube city of Russe.

In other news, the Customs Agency announced it had stopped 120 l of illegal alcohol from crossing the Bulgarian-Romanian border at Russe.

The 6-ton tobacco shipment was discovered in a Bulgarian truck registered to transport paper and cardboard to Romania and had no relevant documents. Customs estimate that an excise tax of more than BGN 0.5 M is due on the tobacco.

Alcohol smuggling is on the other hand regularly effected in small installments by Bulgarian locals, mainly older people, who are carrying a few liters of alcohol each. The liquid is stored in 2 l and 5 l plastic bottles with no designation of contents and producers. People are carrying the alcohol to Romanian town of Gyurgevo across the Danube river, where they can profitably sell it.

Large fines are prescribed for failing to register goods and paying their excise tax.