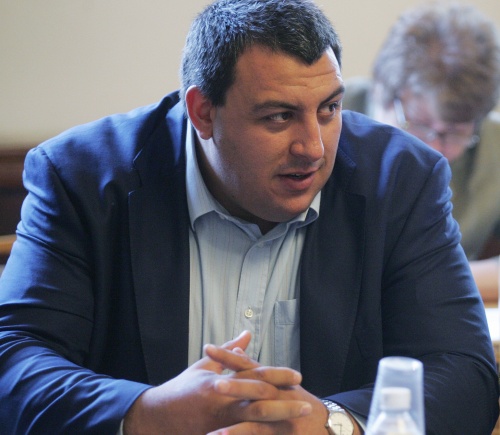 Bulgarian sumo world dignitary Petar Stoyanov 'the Chieftain' is shown here at a sitting of the Parliamentary Committee on Education, Science, Children, Youth and Sports. Photo by BGNES.

President of the Bulgarian Sumo Federation Petar Stoyanov - aka 'the Chieftain' - has allegedly been arrested in special operation “the Killers”, launched Friday morning by the Bulgarian police, according to unconfirmed information from the Bulgarian National Radio.

Earlier Bulgarian interior minister Tsvetan Tsvetanov reported that about 20 individuals have been detained, but did not reveal their identities.

The National Radio reporter's information about Stoyanov's arrest is based on accounts of Stoyanov's neighbors, who said the latter was arrested early Friday morning. It was not confirmed whether the arrest was in connection with the “Killers” operation.

Petar Stoyanov is a leading figure in the Bulgarian sumo world. He has a silver and two bronze World Medals in amateur sumo. Apart from president of the Bulgarian Sumo Federation, he serves as a manager and coach.

The 'Chieftain' is a close friend to Bulgarian best sumo wrestler Kotooshu, having served as the best man for Kotooshu's recent wedding. Mediapool.bg alleges that Stoyanov is adviser on sports to Bulgarian President Georgi Parvanov, as well as to the Parliamentary Committee on Education, Science, Children, Youth and Sports.

Later Friday the Secretary of the President's administration came out with an official statement refuting the information that Stoyanov is or has ever been adviser to the President.

Tsvetanov characterized the criminal group as "exceptionally heavy" and said that it is the first time that criminals of this scale are arrested in Bulgaria.

One person was arrested in Varna, one in Kiten and one in Sozopol; all three were not locals but on holiday. At some of the places checked the police met resistance and found weapons.

A press-conference is expected Saturday at 12.00 EET on which minister Tsvetanov and PM Boyko Borisov will give more details on the special police operation.