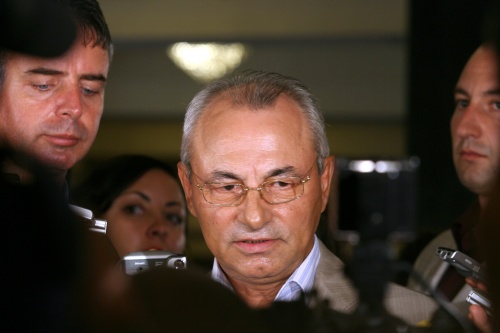 Ahmed Dogan, leader of the ethnic Turkish party DPS was paid BGN 1,5 M as a consultant for the ‘Tsankov Kamak’, ‘Dospat’, ‘Gorna Arda’ and ‘Tundzha’ Dam projects. Photo by BGNES

The leader of the opposition ethnic Turkish party Movement for Rights and Freedoms (DPS), Ahmed Dogan, had been called for questioning at the National Investigative Services Wednesday, the Bulgarian daily Trud informs.

The most likely reason for the summon is the preliminary court proceedings against Dogan over the so-called “Tsankov Kamak” case probed by the Sofia City Prosecutor’s Office, which is yet to confirm or deny the information.

In April, the Prosecutor's Office launched a probe against the ethnic Turkish party leader over his BGN 1,5 M commission as a consultant on 4 Bulgarian hydroelectricity projects for the previous Three-Way, Socialist-led coalition cabinet.

The information about the hefty commission was first reported by “Trud” in March.

In February 2009, Dogan, whose party was a member of the former government, took the BGN 1,5 M as a consultant for the ‘Tsankov Kamak’, ‘Dospat’, ‘Gorna Arda’ and ‘Tundzha’ Dam projects. The payment of the money was made through a contract signed between him and the Institute of Mining, through ‘Minstroy Holding’ represented by Nikolay Valkanov.