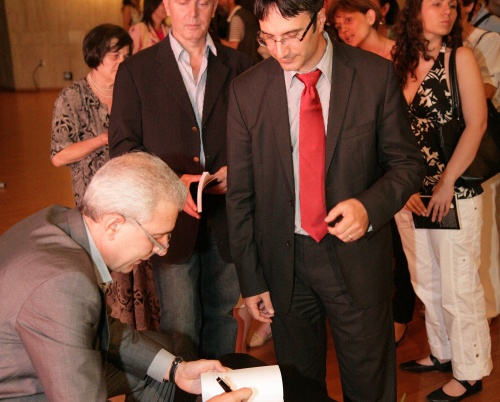 Bulgaria’s Economy and Energy Minister, Traicho Traikov, waited in line to get an autograph from author Dimitar Nedkov. Photo by standartnews

The premiere of the latest novel by Bulgarian author, Dimitar Nedkov, “The Bulgarian’s Sign,” gathered over 200 of Sofia’s intellectuals at the National Palace of Culture, eager to learn more about the intriguing plot.

Nedkov’s second fiction book, true to his message that the Bulgarian nation must realize its contributions to the spiritual progress of the global civilization, proved a provoking read for top politicians, financial experts, journalists, literary critics, writers, and magistrates.

Bulgaria’s Economy and Energy Minister, Traicho Traikov, and his colleague from the cabinet of the ruling GERB party, the Minister without Portfolio for Bulgarians Abroad, Bozhidar Dimitrov, were among the guests.

Dimitrov, who is also a renowned and popular historian, shared that he read the book in one go and even skipped watching a Football World Cup final game. The Minister explained he learned about Nedkov’s books from the Director of the Museum of the Zemen Monastery in Western Bulgaria, who called to tell him something unusual is happening there – the number of visitors had increased drastically with all of them saying they have read Nedkov’s books and decided to see this Freemasons’ place, significant not only for Bulgaria, but for the entire Europe during the Middle Age.

“Honestly, I liked the book a lot. These are the types of readings, written by people who are not experts per say that usually are the most successful – take Zahari Stoyanov or Simeon Radev for example - their books still sell thousands of copies today. From a total of 6 500 publications each year, just 20 remain in history. I am certain, “The Bulgarian’s Sign” will be one of them,” Dimitrov said.

While waiting in line to get an autograph from Nedkov, Minister Traikov admitted it was his wife, who sparked his interest towards the books of the Highest Degree Freemason.

A congratulation letter was sent by Culture Minister, Vezhdi Rashidov, stating “the appearance of the new book in such dynamic and complex times is a sign the Bulgarian spirit is alive and Bulgarians have left a deep imprint in human history and civilization.”

The presentation was opened with a quote from Nedkov that “Freemasonry is a way of life and a constant search for God within each person.”

The author, apparently quite touched and emotional, took the stage with sincere thanks to everyone for the support and the interest.

“I decided to tell a conspiracy story, a Freemason story. People tend to believe members of such societies do not talk. To the contrary, they constantly take part in everything that is happening. In 2000, through a secretly organized scenario, famous American Freemasons visited Bulgaria for the first time – all very big figures in US politics and business. We were wondering where to take them and how to impress them and finally took them to the Archeology Museum. And they were extremely impressed. In 45 minutes they learned the significance of this land they were visiting; took plenty of pictures and then left. Later, a friend of mine went to see one of them, a member of the US Congress. The Senator’s secretary, upon learning the visitor is Bulgarian, asked him angrily – “Are you the one that took my boss to this place?” Because the Senator had enlarged his picture in front of a stone in the Archeology Museum in Sofia and replaced with it the portrait of the American President in his office. Even the Vice President had to inquire what was going on. And every time, the secretary had to hear: “This? I visited Bulgaria…,” followed by a 45-minute lecture of why the President’s portrait had been taken down,” Nedkov told the audience and continued:

“I am often asked what the Bulgarian’s sign is. It is just an important symbol to show the World many things came from Bulgaria. And when we invite the Great Powers to direct traffic on our crossroads, and while we wait for them to point to us the direction, we must first show them the sign, explain we gave plenty to the civilization and we can direct our traffic by ourselves while they are welcomed to join in it. How exactly this sign looks is not important. What matters is the spirit of each and every Bulgarian – this is the Bulgarian’s Sign. Other than that – I am not a professional historian; I am just trying to tell stories and this is why I set aside the documentaries for now – they are easier to write than fiction.”

At the end of last year, the author’s first fiction book – “The Menace Dan Brown” became one of the 3 top bestsellers in Bulgaria, while now, in just days and in times of crisis, 20 000 copies of the second one – “The Bulgarian’s Sign” were sold. Literature experts attribute the popularity of Nedkov’s books to their ability to raise the self-esteem of Bulgarians and to their truthfulness and sincerity.