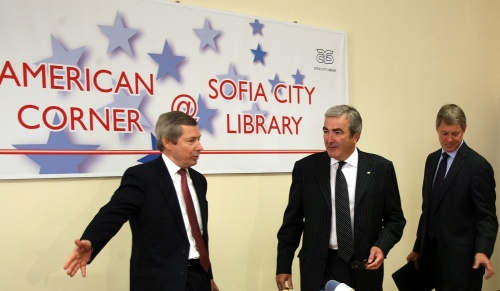 US ambassador James Warlick (L) at Tuesday's presentation of American company Chevron, which has expressed interest in drilling for shale gas in Bulgaria. Photo by BGNES.

The US ambassador to Bulgaria James Warlick gave an official presentation Tuesday of American company Chevron, which has expressed interest in drilling for shale gas in the country.

Chevron representatives, headed by company vice-president Ian MacDonald, are in Sofia for talks with PM Boyko Borisov and other high-ranking officials in order to present their offers.

“Bulgaria has the opportunity to diversify its energy sources. I hope that a prospecting license will swiftly be granted to Chevron, who are going to invest a lot of money in Bulgaria,” said the American diplomat.

Warlick thus implicitly replied to comments on the part of Bulgarian President Georgi Parvanov to the effect that any third parties choosing to comment on Bulgaria's energy policy should be ready to present palpable alternatives.

Shale gas extraction is considered by some as the alternative to conventional natural gas extraction that has the best outlook. It involves a novel technique tapping deposits in the earth's crust that were not reachable before.

Chevron's MacDonald concurred that shale gas might provide great opportunities for energy diversification in Europe, but added that shale gas would be much more expensive. The latter was omitted by the event's translator, according to Dnevnik.bg.

Chevron has already filed a prospecting request and awaits confirmation from the Ministry of Environment and the Council of Ministers. Prospecting has been conducted in Poland and Romania, but no shale gas has ever been extracted in Europe up to this point.

The shale gas deposit of interest for Chevron is located in North-Eastern Bulgaria near the Romanian border.

There have been constant reports in the past that Chevron has expressed interest in buying a share of projected Burgas-Alexandroupolis oil pipeline, whose prospects of completion are still not very bright.