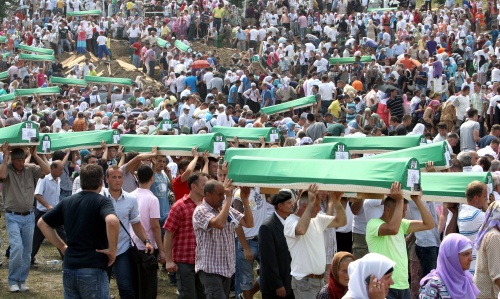 Bosnian Muslims carry caskets containing the remains of 775 Bosnian Muslims during the funeral in the Potocari Memorial Center, Srebrenica, Bosnia and Herzegovina, 11 July 2010. Photo by EPA/BGNES

Bulgaria's Foreign Minister Nikolay Mladenov was among the international guests to the remembrance ceremony of the 15th year since the massacre in Srebrenica in Bosnia and Herzegovina.

Mladenov became the first Bulgarian representative ever to pay respect on part of his country to the memory of the some 8 000 Bosnian Muslim victims who were killed by the Bosnian Serb army in July 1995.

“In the End, we will remember not the words of our enemies, but the silence of our friends,” a quote by Martin Luther King, Jr., was what the Bulgarian Foreign Minister Mladenov wrote in the book for condolences at the Potocari cemetery in the Republic of Srpska.