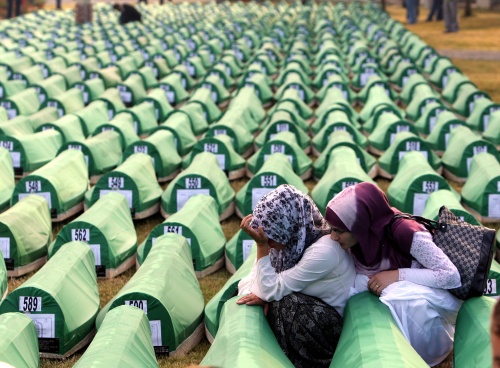 Bosnian Muslim women mourn over a casket during the funeral of 775 newly-identified Bosnian Muslims at the Potocari Memorial Center, Srebrenica, Bosnia and Herzegovina, 11 July 2010. Photo by EPA/BGNES

A memorial ceremony has been held at the Potocari cemetery outside the town of Srebrenica remembering the atrocious massacre of Bosnian Muslims committed by the army of Bosnian Serbs 15 years ago.

The memorial includes the burial of 775 coffins with the newly identified remains from mass graves.

More than 8 000 Muslim men and boys were murdered on July 11, 1995, by Bosnian Serb troops under the command of General Ratko Mladic who is still being wanted, as several hundred Dutch UN Blue Helmet peace-keepers failed to protect the Muslim population of the enclave.

The memorial ceremony has been attended by Serbian President Boris Tadic, which is seen as an important gesture after in March Serbia's Parliament adopted a resolution apologizing for the massacre and saying the authorities in Belgrade at the time should have done more to prevent the world atrocity in Europe since World War II. Croatian leaders as well as Turkish Prime Minister Recep Taiyyp Erdogan have also attended the remembrance.

Srebrenica had been declared a UN safe zone, to which thousands of Bosniaks had fled during the 1992-95 Bosnian war.

But the Dutch UNPROFOR peace-keepers there allowed the heavily-armed Bosnian Serb army at the promise that the Muslims taken captives will not be hurt. The Srebrenica massacre is the only episode of the Bosnian conflict to have been recognized as genocide by the UN tribunal.

Sunday's funeral of the newly identified corpses will be the largest since the setting up of the memorial at Potocari, where 3 749 men have already been buried.

US President Barack Obama has described the Srebrenica massacre as "an unimaginable tragedy", saying that fugitive Bosnian Serb wartime military commander Radko Maldic and other alleged perpetrators must be brought to justice.