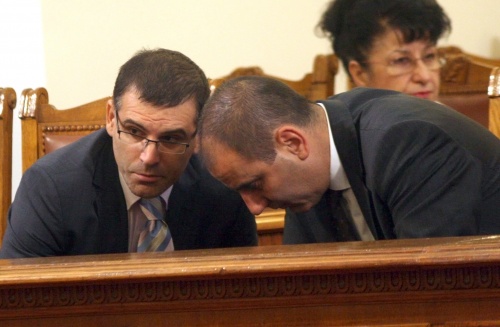 Bulgaria's two Deputy PMs Djankov and Tsvetanov during the budget debate on Thursday. Photo by BGNES

The Bulgarian Parliament has adopted at second reading the 2010 Revised State Budget Act providing after a 12-hour debate in which the ruling GERB party lost the backing of one of its major partners.

The revised budget was approved with the votes of GERB together with the MPs from the nationalist party Ataka.

The rightist Blue Coalition, which supported the draft bill at first reading in June, this time backed out blaming Finance Minister Simeon Djankov for failing to fend off the demands of the other ministers and thus providing for a staggering increase of state spending.

The opposition Bulgarian Socialist Party and ethnic Turkish party DPS have voted against the revised budget.

The new law provides for increasing state spending by BGN 436 M compared to the original 2010 state budget, and for a reduction of the projected revenues by BGN 1.909 B. Bulgaria's contribution to the EU budget and other EU-bound payments are increased by BGN 257 M.

“Unlike our neighboring states we are not increasing the direct or indirect taxes and the insurance and social security payments. We are seeking transparency in everything,” Bulgaria's Finance Minister Simeon Djankov stated despite criticism by former PM and Socialist Party leader Sergey Stanishev who believes the new budget law is designed to allow the Borisov government to “eat away” the fiscal reserve that his Cabinet accumulated.

“Today Bulgaria is among the states whose fiscal policy is best suited for the hardships and effects from the crisis. What is more, our government received a hard heritage. The economic climate in Europe is unfavorable and hard to predict but we are responsible and are doing what we are supposed to be doing,” declared Djankov after the adoption of the revised budget.

The GERB party government has sought to justify the revision with the reduced revenues as a result of the economic crisis, and its unwillingness to increase any taxes.

One of the main factors that necessitated the revision of Bulgaria’s 2010 state budget is the low level of domestic consumer demand, according to Finance Minister Djankov.

It also provides for a 20% reduction of non-interest state spending; cuts in administrative expenses are expected to save BGN 900 M.

At the same time, however, the revised state budget will provide additional BGN 220 M for Bulgaria’s National Health Insurance Fund, BGN 116 M in subsidies for the tobacco producers, and BGN 142 M for social spending and benefits.

About BGN 200 M are set aside for funding infrastructure projects, while another BGN 660 M are envisaged for paying out debts owed by the state to private companies.

It also provides for a 20% reduction of non-interest state spending; cuts in administrative expenses are expected to save BGN 900 M, and for a deficit of 4.8% of GDP on a cash basis and 3.8% of GDP under EU accounting rules. It sets the fiscal reserve minimum at BGN 4.5 B, down from BGN 6.3 B.

The new law will also allow the government to spend money from the fiscal reserve with the only requirement to leave at least BGN 4.5 B in it at the end of 2010.