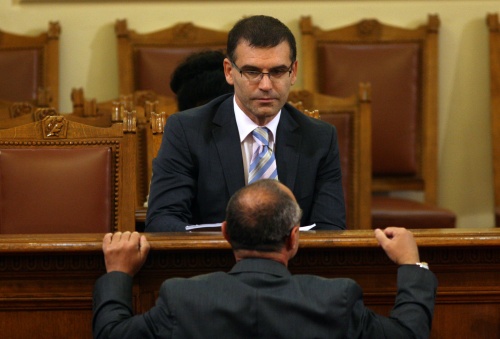 Finance Minister Djankov has remainded firm in fending off pleas to allocate more money for mosquito control along the Danube. Photo by BGNES

Mosquito control funding has emerged as a major issue during the largely apathetic parliamentary debate on Bulgaria’s 2010 Revised State Budget.

Thursday’s debate at second reading turned farcical as the funds for mosquito control were the only topic raised by the MPs on which Finance Minister Simeon Djankov made a very brief comment, and only after he was urged for that by Parliament Chair Tsetska Tsacheva.

“We don’t need to allocated additional funds for fighting mosquitoes. We have already set aside some money for that in the emergency funds. We are working on this matter together with the Romanian authorities,” said Djankov laconically on the issue of mosquito control in the Bulgarian towns along the Danube.

Before that mosquito control was raised as a major issue by opposition MPs.

“I am seriously demanding BGN 1 M more for mosquito control because the Romanians have already treated their bank of the Danube and their mosquitoes will soon invade Bulgaria,” warned Socialist MP and former Interior Minister Rumen Petkov.

“I don’t know if you are being bitten by mosquitoes or by horseflies but you are using every single issue to draw apocalyptic scenarios,” declared in turn MP Pavel Shopov from the Ataka party which supports the Borisov government.

The Bulgarian government went for slashing the money for mosquito control as part of its austerity measures adopted in the spring of 2010.